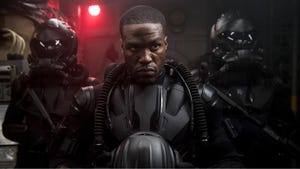 Yahya Abdul-Mateen II, who played Black Manta in the Aquaman franchise and Doctor Manhattan in the Watchmen HBO series, is in talks to star in the upcoming Wonder Man series heading to Disney Plus, according to an article Monday in The Hollywood Reporter.

The Disney Plus series reportedly will be led by  Destin Daniel Cretton, director of Shang-Chi and the Legend of the Ten Rings, and Andrew Guest, who was a writer-producer for Brooklyn Nine-Nine and Community. No other details about the show have been revealed.

Disney didn’t immediately respond to a request for confirmation.

Wonder Man first appeared in Marvel comics in Avengers No. 9 in 1964 as a villain but eventually became a long-time member of the superhero group His primary powers are super strength and invulnerability, but Wonder Man is best known for being a Hollywood stuntman and then actor during his comic run.

Last week, news of a Vision-only series for Disney Plus became public. The two characters have a history with each other in the comics. In Avengers No. 58, it was revealed that Vision’s memories and brain wave patterns were a copy of Wonder Man, who was supposedly dead at the time. Both heroes also had feelings for the Scarlet Witch in their comic history.

How High School Should Change for an Era of AI and...