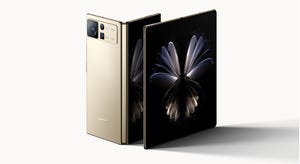 Xiaomi unveiled a second-gen foldable phone on Thursday, rounding off a busy week of foldable phone launches that saw Samsung and Motorola reveal foldables of their own.

The Mix Fold 2, a follow-up to the Chinese company’s inaugural foldable phone, is a book-style foldable that Xiaomi is marketing for its ultraslim design, among other features. When folded, the device measures 11.2mm, which means it’s the world’s slimmest commercially available book-style foldable phone. It’s approximately 4mm thinner than Samsung’s recently launched Galaxy Z Fold 4. Xiaomi credits its “micro waterdrop” hinge for helping achieve the slim design, which allows for a tighter fold on the flexible display panel within the 8.8mm-tall hinge structure.

The Mix Fold 2 features two displays: A 6.56-inch panel on the cover, which expands into an 8-inch interior screen when you open it up. As for cameras, there’s one 20-megapixel front-facing sensor and three cameras on the rear, including a telephoto camera.

The Mix Fold 2 runs on Qualcomm’s latest Snapdragon 8 Gen Plus 1 chipset, the same one found in Samsung and Motorola’s latest foldable phones. It also has a Harman Kardon dual-speaker setup, a 4,500-mAh double-cell battery and 67-watt fast charging support. The base version of the Mi Mix Folds is priced at 8,999 yuan, which converts to approximately $1,330, £1,090 or AU$1,860. It will be released in mainland China only.

Despite the flurry of launches this week, foldable phones account for just a sliver of the overall smartphone market, although shipments grew dramatically in 2021 compared to 2020. According to the International Data Corporation, 7.1 million foldables were shipped in 2021, marking a 264.3% increase from 2020.

The Mix Fold 2 was announced at a virtual event alongside a human-sized robot and a bevy of other Xiaomi products, including a new tablet and a budget phone.

You probably don’t need to worry about public WiFi anymore

How to Become a Data Entry Specialist