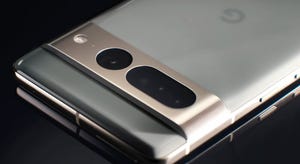 The Google Pixel 7 and 7 Pro have launched as the best Google phones yet, with better camera lenses, software and features, including an easier way for people with blindness or low vision to take selfies. The company added a bunch of Google Assistant features and touted new photography tricks like the unblurring of old photos.

It’s clear Google put a lot of work into its latest flagship phone. What’s less clear is whether anyone will care.

In a world dominated by iPhones and Samsung phones, Google isn’t a contender. Since the first Pixel launched in 2016, the entire series has sold 27.6 million units, according to data by analyst firm IDC — a number that’s one-tenth of the 272 million phones Samsung shipped in 2021 alone. Apple’s no slouch, having shipped 235 million phones in the same period.

The Pixel has long been a paradox of the mobile handset business. The family is the standard bearer for Android, the most popular mobile operating system in the world, bankrolled by one of the most successful and well-known companies. Yet it lags far behind its biggest rivals and is a niche player in a world that it essentially controls.

It’s a bit baffling for Google’s phones to sell so poorly, since the Pixel phones have been well-liked by reviewers and consumers (at least the ones who’ve heard of them). Moreover, they’re the first phones to get new features and versions of Android months or even years before other phones.

A set of decisions and strategic moves have put Google in this position, something the company is trying to dig itself out of. Its fall Made by Google event typically is a cornucopia of different products, from smart speakers to security cameras. Thursday’s event was solely focused on the Pixel name.

But here are some of the reasons why Google is playing catch-up now.

But that exclusivity meant fewer people could buy the phone in the US, a strategic misfire with long-term implications. Consumers had been able to buy Apple and Samsung phones from any carrier for years before Google released its first Pixel handset in 2016, so it didn’t help that Google’s first three years of Pixel phones were exclusive to Verizon, limiting the brand’s reach to customers who were already choosing between iPhones and Galaxy phones.

That limited reach has kept Pixels far from consumers’ minds as the field of phone brands has dwindled. Even without competition from LG, which stopped selling phones in 2021, and brands like Xiaomi that sell high-value Android phones in China but not in the US, Pixels are far less known than iPhones and Samsung Galaxy handsets.

“Despite Pixel getting rave reviews, Google’s biggest challenge in gaining share has been poorer marketing spend and presence with carriers, both areas that are currently dominated by Apple and Samsung,” said Nabila Popal, a research director at IDC.

Pixels aren’t the only phones to be locked to a single carrier — Motorola had followed up its lucrative exclusive deal for the Droid with many follow-up devices. But times had changed, and when Google finally opened up its phones to other carriers with the Pixel 4 in 2019, it had to play catch-up with other carriers and consumers.

By then, iPhones and Samsung flagships had entrenched themselves in the public consciousness as devices that pushed the limits of both software and hardware, with powerful chipsets and lots of camera lenses. Google’s phones focused on just software with mediocre tech specs and cameras, famously keeping the same primary camera sensor from the Pixel 2 through the Pixel 5.

Despite improving the photo software every year to compensate, Google’s phones still got a reputation for lagging behind other top phones in hardware. Pixel phones appealed only to enthusiasts rather than general consumers because of this software-intensive approach with a purer version of Android that didn’t have the modified overlays in Samsung or Motorola phones.

Google course-corrected by including improved cameras and its new in-house Tensor chipset in last year’s Pixel 6 phones, and has even better hardware in the new Pixel 7 phones. With a triple-rear camera (found in the Pixel 7 Pro) and bespoke silicon, Google’s pivot has led to fun and innovative camera-focused features like scrubbing unwanted bystanders out of your photos and helping blind and low-vision users take selfies.

Google, however, still doesn’t have a strong identity for its phones that sets them apart from iPhones and Samsung’s Galaxy handsets. For years, enthusiasts and members of the media have been the loudest proponents of Pixels, calling them good camera phones, but even Google doesn’t quite know what its phones do best. For instance, the company described its Pixel 6 handsets as “the phone for you,” citing customization features that actually came to all phones that got Android 12.

Moreover, the company seems split on whether its Pixels offer serious value or push the limit as flagships. While the Pixel 7 has most of the bells and whistles of its pricier Pro sibling for a more midrange $600 starting price, the Pixel 7 Pro rivals Samsung and Apple flagships at a $900 starting price — but without their name recognition in phones.

“Part of Google’s challenge is that smartphones are a mature market, and consumers are — understandably! — happy with Samsung and Apple,” said Avi Greengart, analyst at Techsponential.

Unseating Samsung may not be Google’s goal, Greengart explained, since doing so could destabilize Android. Both phones use the same operating system, so Samsung’s continued dominance of the phone market is still a win for Google. So long as Pixel phones sell well enough to be profitable, Google will probably keep making them.

The US market is the most promising for Pixel sales. Without cheap Android phones from Xiaomi and others, and with LG out of the phones game, Pixels have grown to 2% of the North American market in the second quarter of 2022, up from 1% in the same period in 2021. That’s a paltry amount compared with Apple, which owns 52% of the market, or even Samsung, which has just over a quarter of the US market.

“Pixel is still not a household brand like Galaxy,” said Anthony Scarsella, analyst at IDC.