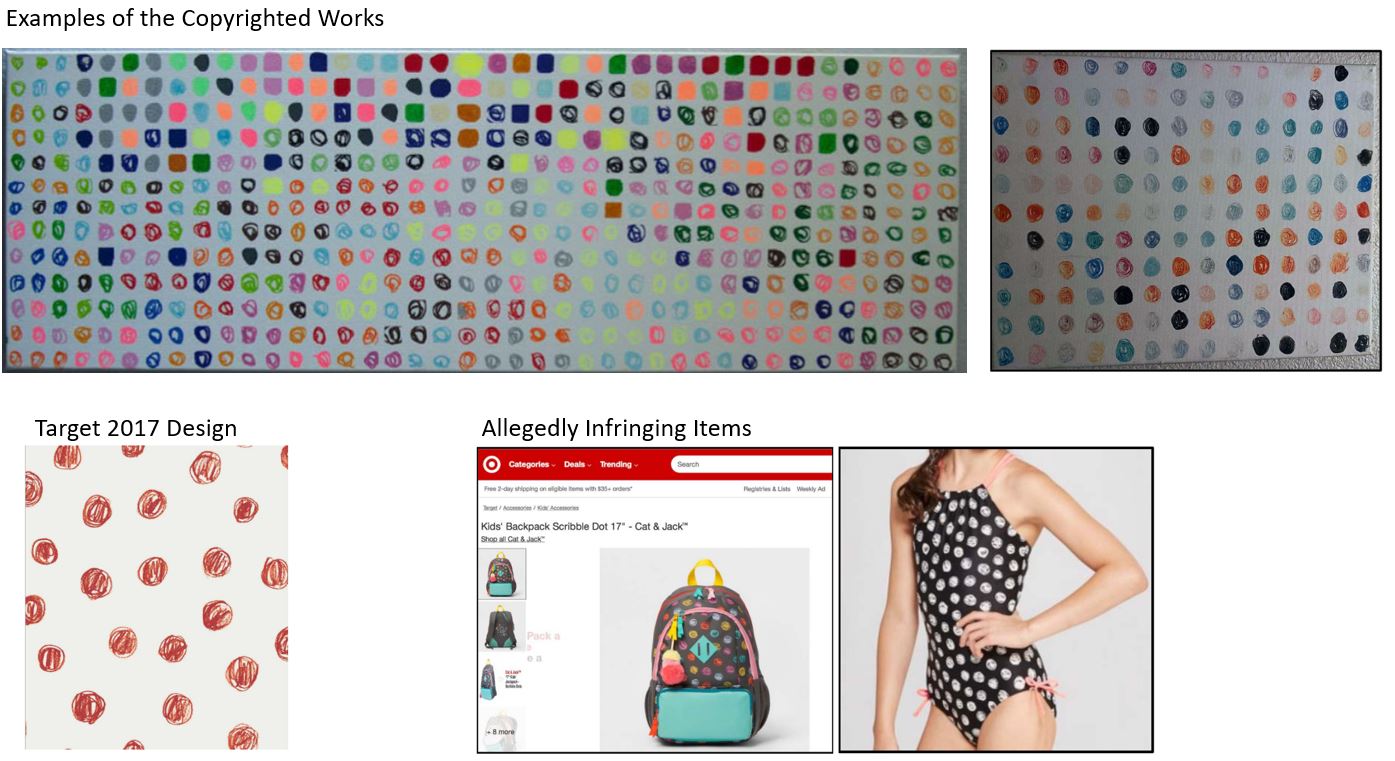 This case relates to Target’s “Cat & Jack” clothing line. The plaintiff, NOC, is a teenager who has copyrighted designs in hand-drawn dots that Target allegedly copied in the clothing line. Target and NOC had some direct dealings, including bringing NOC to Target’s headquarters in July 2018. However, Target’s allegedly infringing works apparently were designed no later than December 2017. Basically, it appears NOC filed a lawsuit as his “thank you” to Target for hosting him. This picture shows the copyrighted works and Target’s efforts:

At issue is whether Target independently created the works. NOC argued that Target had access to them online. However, the court correctly says: “the mere fact that [the infringed] work was posted on the internet prior to the creation of [the] defendant[’s] work is insufficient by itself to demonstrate wide dissemination.” [See also this uncited ruling, Lois v. Levin, 2022 WL 4351968 (C.D. Cal. Sept. 16, 2022) (“Courts within this Circuit and our sister Circuits have consistently held that the mere availability of a work online is insufficient to establish widespread dissemination”)]. Instead, the court analogizes to precedent saying “the focus is on the popularity and commercial success of the particular song, not the singer in general.” This prompts the court to go through each work, one-by-one, to determine the work’s visibility.

None of the following works supported the access inference:

The court might have aggregated all of these stats to evaluate the odds that Target saw at least one of the precedent works, but the court didn’t take that approach.

Instead, the court summarizes:

N.O.C. is no doubt a talented artist with an inspiring story, and his artwork has clearly touched his community. At this stage of the proceedings, however, Cooley must bring forward specific facts demonstrating that Target had a reasonable possibility of accessing each of the Copyrighted Works before the alleged infringement. Because no such evidence has been provided, the Court must grant Target’s motion for summary judgment.

This work-by-work analysis reminded me of the classic Arnstein case, which involved works that ranged from a 1M seller to works that were ransacked from Arnstein’s apartment after “stooges” had followed him. The former was amenable to an access inference; the latter was not. For more on the Arnstein case, see this blog post.

This ruling shows just how hard it is to get the inference of access for works posted to the Internet. They may need to be big viral hits before the inference, or there needs to be some other evidence of access. While I see this as a positive approach given the potentially significant consequences if access is inferred, it also raises the possibility that courts will loosen the doctrine of “striking similarity” to bridge that gap another way. Still, copyright owners need to consider the implications of posting their works online, because they might be unable to show that infringers accessed the precedent. Perhaps it also mattered that Target had a well-documented design process, something most smaller defendants do not have.