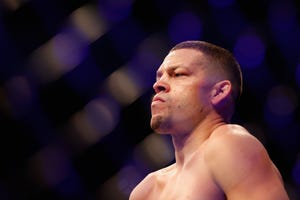 Well, that was weird. Where do we even start?

Let’s start with Nate Diaz vs. Khamzat Chimaev. That was the fight that was supposed to headline UFC 279. But Chimaev missed weight massively, coming in 7.5 pounds over the 171 limit. To save the card, the UFC had to rearrange the entire main card.

After negotiations between the fighters, there’s a new main event. And one that, bizarrely, makes a lot more sense.

Instead of being outmatched by Chimaev, Nate Diaz is now facing off against fellow UFC legend Tony Ferguson.

Chimaev is now fighting Kevin Holland at a 179-pound catch weight in the co-main event. Considering these two have been circling each other, sending gibes each other’s way for months, this fight may also make a lot of sense.

Li Jingliang, who was initially going to fight Tony Ferguson, is now facing off against Holland’s old opponent, Daniel Rodriguez.

In short we’ve gone from…

Probably the biggest loser here is Li Jingliang, who’s gone from a prestige co-main event with a legend in Tony Ferguson, to a really tough fight with a bigger man in Daniel Rodriguez.

But the card is alive.

It’s been a chaotic few days. Before the weigh-in circus, UFC President Dana White was forced to cancel the UFC 279 press conference at the very last minute, after a huge scuffle backstage featuring Chimaev and Kevin Holland, another fighter on the undercard.

The pair had been arguing back and forth before things got physical. Reportedly, members of Diaz’s entourage also got involved, with bottles being thrown.

All par for the course with a Diaz fight.

The UFC now has a partnership with ESPN. That’s great news for the UFC and the expansion of the sport of MMA, but bad news for consumer choice. Especially if you’re one of the UFC fans who want to watch UFC in the US.

In the US, if you want to know how to watch UFC 279, you’ll only find the fight night on pay per view through ESPN Plus. The cost structure is a bit confusing, but here are the options to watch UFC on ESPN, according to ESPN’s site:

You can do all of the above at the link below.

MMA fans in the UK can watch UFC 278 exclusively through BT Sport.

There are more options if you live in Australia. You can watch UFC 278 through Main Event on Foxtel. You can also stream via Kayo for AU$55. You can even order using your PlayStation or using the UFC app on your Xbox.

Need more international viewing options? Try a VPN to change your IP address to access those US, UK or Australian options listed above. See the best VPNs recommended by CNET editors.

As always, these cards are subject to change.