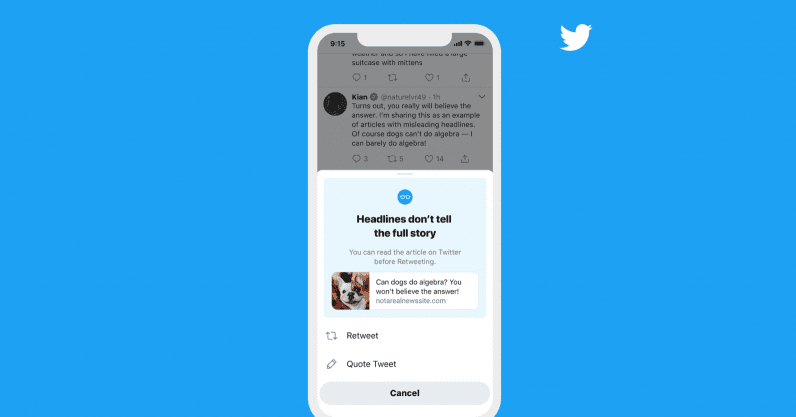 Back in June, Twitter began testing a feature that would prompt users to read an article before they retweet it. Because, you know, that’s something everyone should be doing. Now the test is rolling out to everyone –and it’s probably one of the smartest things the company has done in a while.

As a recap, the feature essentially calls you out when you try to retweet an article that you haven’t opened on Twitter. Before you’re able to share, you’ll see a prompt telling you that “headlines don’t tell the full story.” You’ll then have to confirm you want to share.

Twitter says that since it began testing the feature with a limited number of users, it has noticed:

? More reading – people open articles 40% more often after seeing the prompt
? More informed Tweeting – people opening articles before RTing increased by 33%
? Some people didn’t end up RTing after opening the article – which is fine! Some Tweets are
best left in drafts ?

This a surprisingly encouraging result; it means people are sharing information in a more informed manner. The fact that some people are no longer sharing the article after opening it can only be a good thing. While Twitter doesn’t specify if the feature led to reduced sharing of fake news, it’s not hard to see how encouraging people to actually read articles could make them more likely to share quality content.

What’s next:
? Making the prompt smaller after you’ve seen it once, because we get that you get it
?Working on bringing these prompts to everyone globally soon ? pic.twitter.com/08WygQi06G

I’m sure the feature will occasionally be annoying — say, if you read the article elsewhere — but the benefits outweigh the cons. As a reporter, I’m well aware of how many people share articles based on a headline alone; it’s part of why writing a headline takes a disproportionate amount of time relative to the rest of an article.

While there’s no word on exactly when you’ll see the feature, the company says it will arrive “soon.” Here’s to more informed tweeting.

Go to Publisher: The Next Web
Author: Napier Lopez