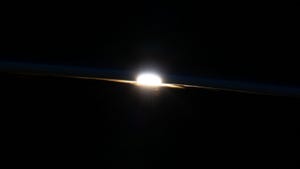 Some images from space make me want to put my life on pause and just sit down to write poetry. On Tuesday, NASA shared a sneaky-beautiful image of an orbital sunset as seen from the International Space Station in June.

The image looks simple at first. There’s a flattened ball of light that appears to be melting into a puddle, like butter in a pan. That’s the sun. Keep staring and you can make the faint blue curved line of Earth’s atmosphere, a thin shell protecting our planet against the darkness of space beyond.

“The last rays of an orbital sunset burst through Earth’s horizon as the International Space Station flew 258 miles above Brazil in this image from June 2022,” NASA said in a statement. The agency noted that astronauts on the ISS witness 16 sunrises and sunsets each day. Here’s what an orbital sunrise looks like.

The sunset represents a moment of wonder, an artistic perspective on humanity’s science achievements. There are people living in space, witnessing those moments where our star seems to melt into or rise up from the planet. Even better, the cameras on board the station are there to bring the views down to Earth for the rest of us.

This image is worth a moment of contemplation and perhaps a poem or two.