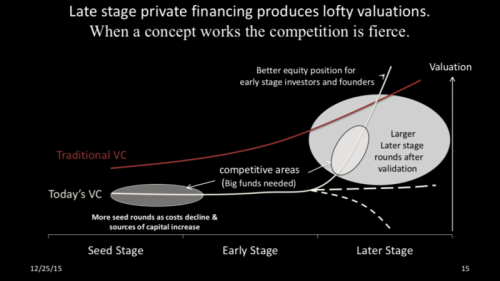 Recently I discussed the Pre-IPO-Dip and the impact on mid stage VC investors in unicorns. Keep in mind when investor were looking for investing in those companies which should become multibillion companies from a valuation perspective.

Competition heated up in two areas of the investment life cycle

Development of valuations and investors sweet spot in unicorn era

The Seed to Early stage and the later stage. The only detail some of those investors missed was the importance to understand at which point in time they were when investing. They misplaced their timing as being too late, while they were mostly in mid stage but behaved as a late stage investor: D- Series became the new B-Rounds. At the end of the unicorn era, which we will see in 2016, in a Pre-IPO-Dip unicorns need to accept down-rounds either in finale private rounds or at lastest in their IPO.

There are seed-funds like Y-Combinator and 500startups which nurture the very early seed stage. We have seen a lot of well experienced and highly valued VCs entering in A Series at high valuations. And as well following a lot of VCs including corporates investing at late stages followed by PE similar late stage funds. This development generated highly overpriced A-Rounds and very competitive and oversubscribed D/E-Series.

Next to higher numbers in absolute values, fueled by quantitative easing and zero interest rates organized by FED, the numbers also increased in terms of multiples compared in between those rounds. From 2.4x in A-Rounds it grew to 3.9x in late stage rounds. The later due to the unicorn era based on hopes on up rounds in IPOs of those companies. (Data source Quandl)

The statistics about round valuations is important from an investors perspective because of the liquidation preference model in venture capital. Investors will receive their invested capital before a pro rata distribution to all shareholders of proceeds in a trade sale or IPO. Whenever the price of a trade sale or IPO is lower than last private valuations or even worse only amount to the sum of all invested capital (equal to sum of liquidation preferences) investors will be hurt in their business model. VCs are not intended to invest in a risky asset class to just get their money back with a 8% interest rate. They are in the business of multiples of their investments from 3–7x at the low end of their expectations. So to understand who is a victim of the Pre-IPO-Dip problem, which we are facing in 2016, it matters to know who invested at those stages and will take the financial loss on their own business model.

So Square’s IPO pricing was 4x of their invested capital for investors overall. We also know that the last investors had a full ratchet anti dilution protection to cover any loss in a lower priced IPO. So the median return for all investors must be lower than what they expected. Still at the end of the unicorn era this is still a good outcome compared to upcoming unicorn IPOs, we will see in 2016. Box took in $563m for a $1.67bn IPO. Xetra Communications took in $303m of funding, has a current valuation of $71.18m at $4.16 per share. Its initial IPO pricing was planed for $9-$11 per share but was lowered to $5 or roughly a $85m valuation so less than a third of its overall invested capital since its first round in 2000.

Following this analysis, mid stage investors will take the biggest loss on their estimated returns for their invested capital. It will be worth looking at investors in those rounds. It needs to be known that the $225m in 2014 was a line of credit and not an actual equity financing round backed by several banks (Barclays, JPMorgan, Morgan Stanley, Silicon Valley Bank, etc.). Those investors may wanted to get into the business for running the IPO rather than a pure multiple on their investment. The $150m Series E was protected from a down round/low IPO pricing. So impacted in their returns should only be investors of financing rounds in 2012 and 2011 of $300m invested capital. Those are among others: Sequoia, Tiger Global, Richard Brandson, Kleiner Perkins, Starbucks, Citi Ventures, Visa. Looking at this list, this is giving a good impression on the groups of victims of the Pre-IPO-Dip: Large Silicon Valley VCs and corporations, who were dragged into the private market investment game. (Some other VCs participated in those mid stage rounds but were early stage investors like Khosla or SV Angel who will have an upside from those early stage investments.) So don’t be surprised if you hear certain Sillicon Valley VCs talk down the Bubble 2.0 and will go on blogs and stage to convince late stage investors and corporations to keep investing in their companies. VCs are sales people after all and they need to convince buyers from their products (aka ‘portfolio companies’). Some of those VCs have a diversified portfolio but a lot of them haven’t. It shouldn’t surprise an educated reader when there is the next Twitter rand over “it’s a bubble / it is NOT a bubble”.

Outlook for investors and employees

We will see more of those groups being hit in 2016 by the imploding valuations of private markets for unicorns, which are trying and forced to go public. Unfortunately their will be no other option for those companies to stay in business. Turning profitable within a year of sufficient funds in the bank will be hard to achieve. Raising new funds from those two categories without admitting to down round protections and hitting current investors will be nearly impossible. Finding unexperienced corporates to invest at friendly terms for the invested capital will be harder because those corporations have established experienced investment teams overt the last years who know their way around unicorn valuations.

When valuations come closer to the amount of invested capital there are more groups being hit by this trend. New York Times published a good posting about the impact on employees in unicorn startups. As discussed in my earlier posting it will become increasingly difficult for companies to hire good employees purely on stock options to save cash. As we have seen in Silicon Valley employees will change companies more frequently to increase their chances for a big win from their option plans. Also they will rather join in late stage to receive higher salaries and top those up with Pre-IPO stock options.

For Angel investors this trend has no clear answer: A positive outcome is that private companies will reach an exit earlier than in the unicorn era where keeping those companies private for a long time was part of the strategy. As seed investors the valuations were low and the multiples are still huge to make a good return, as long as companies will exit at 3x-5x of their invested capital. If the overall trend of less returns for late stage investors in the VC asset class along side with higher interest rates in less risky asset classes continues we will see a drop in VC financing activities in the mid term future. However this is a rather small impact in private and public markets compared to the overall activities.