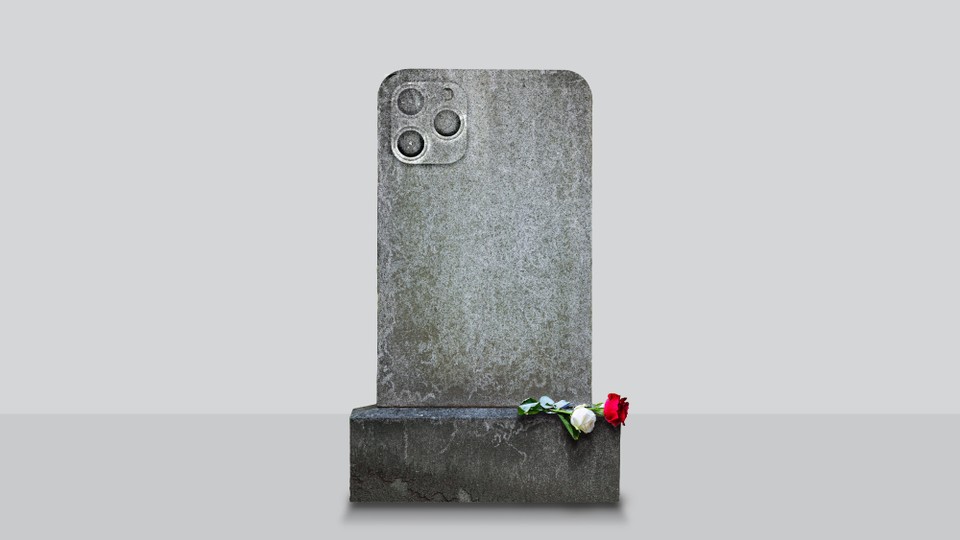 I cradled my first iPhone like an egg after I bought it. The year was 2011; the season was winter. The ground was slushy, but I was too nervous to take the thing on the subway. It was an absolute luxury, by far the fanciest and, I felt, most fragile thing I owned—more Fabergé than farmstand.

The precise model was the iPhone 4, which looked like an ice-cream sandwich from the side and felt about as sturdy. I wasn’t just concerned about slipping and dropping the thing: It was dark, I was in a crusty part of New York, and I looked like I got scared at Death Cab for Cutie shows—would someone punch me in the face and yank it? The iPhone was relatively uncommon back then; BlackBerry—the traditionalist’s choice—was still more popular, but both were outnumbered by Android. Nokia was trouncing them all. Most Americans didn’t have a smartphone, and many had no mobile phone at all.

In a market generally defined by boring hunks of plastic, Apple gained an edge through impeccable design that was actually less functional than most of the competition. Many reviewers rightly pointed out that the touch screen was worse to type on than a physical keyboard, and complained about the iPhone’s fragility. In these early years, buying one was the fashionable choice, not the pragmatic one. It was cool.

How things have changed. As of this summer, for the first time ever, more Americans now use an iPhone than use an Android phone. Toddlers handle them while sitting in strollers. Parents handle them while pushing strollers. For a time during the pandemic, the Kardashians ripped through them on a weekly basis to film their show without risking exposure to a film crew. There’s no mystique, no scarcity, and not much in terms of novelty. The iPhone is like a tote bag with a few cameras: a utilitarian default.

Read: People aren’t meant to talk this much

That’s not to say people won’t buy new ones, of course. Quite the contrary. This week, Apple unveiled its latest iPhone models: the iPhone 14, the iPhone 14 Plus, the iPhone 14 Pro, and the iPhone 14 Pro Max. They’re quite similar to last year’s, and the previous year’s, and the year before that, and indeed the year prior. By now, the routine is familiar; every year, Apple ships a couple hundred million phones to be purchased by perhaps millions of people enrolled in the company’s annual upgrade program, and by many others who are not. These phones are expensive—$800 and up—and certainly not everyone can afford them. But Apple sidesteps this hurdle with its upgrade program, which converts the up-front cost into a monthly loan payment.

That’s a big part of the problem in a nutshell: The system erected around annual upgrades means that many, many people buy the iPhone and then live their life quite literally indebted to Apple, which is better than its competitors at locking people into a “walled garden”—or, as the writer Cory Doctorow has called it, a “feedlot.” What was once a bold consumer choice is now more like a sad dip into the trough.

I wouldn’t have predicted any of this on that cold walk home, and not just because I couldn’t imagine ever being in a position to upgrade from my beautiful new device. A few months prior to my big purchase, in 2010, Gizmodo paid $5,000 to acquire a lost prototype of the iPhone 4—that same one I would eventually hold so gingerly—and published all of its secrets before Apple could announce them. This iPhone felt extremely new and exciting, even after Apple made it all official: the first one with a selfie camera! FaceTime! A Retina display! And … a gyroscope? Great. Apple eventually called it the iPhone that changed everything again, and it was right. The marketing matched the delivery and people went ballistic, lining up by the thousands, and digital storefronts struggled to keep up.

The iPhone 14, meanwhile, with a suite of incremental and frankly boring improvements, is the iPhone that will change nothing. This isn’t a knock on Apple, exactly. It’s a credit to the company for which, where iPhone quality is concerned, the scale slides from “very good” to “very, very good.” But the iPhone’s predictability is a sign of the shifting cultural landscape around the device—and the changes in attitudes brought on in part by Apple’s own innovations. Where the iPhone once symbolized verve, it now evokes crushing inevitability. The company will produce, the people will consume, and the waste will pile up (and up and up). Don’t let the branding deceive you: With the introduction of the latest devices, Apple has now forged 38 distinct models of iPhone since 2007, once all the Pluses, Maxes, Minis, and SEs are accounted for.

Read: Why the past 10 years of American life have been uniquely stupid

We’re swamped in phones, and the malaise many people feel about technology billows up from their screens. Too many Americans have been forced to rely on smartphones for want of better internet options during the pandemic. Polls show that the majority of us see big problems in the services they’re a gateway to: Social-media toxicity, misinformation, data harvesting, abuse. The iPhone’s pixels illuminate the Instagram post that gives you FOMO, the YouTube video that makes your uncle doubt the vaccine, the NFTs that sell for millions, and the tweet instructing you to log off forever. Bo Burnham was right when he described the internet as “a little bit of everything all of the time”—digital life has become a bit samey and numbing. It makes sense that the iPhone would follow suit; everything is formatted to fit its screen.

To an extent, these problems are out of Apple’s hands. And certainly, plenty of iPhone owners blissfully don’t fret about them. Still, Apple’s products can’t exist in a vacuum: Just as the company proved itself capable of nuking Facebook’s ad business with a change to its privacy features, it has to know that its new hardware will shape the world it’s born into. That world is dark, and where once a new iPhone seemed to brighten it, it feels like the 14 series is leaning all the way in. The iPhone 14 Pro’s screens are now “Always On,” as if in concession to our terminal affliction. And—this is real—there’s a new “Emergency SOS” feature, which will allow an iPhone 14 to connect to a satellite and call for help if you’re lost or trapped, a victim of a crime, or imperiled by fire. Apple promoted this with a video of a woman summoning rescue helicopters from a wooded mountaintop. It felt futuristic and kind of awful, which is a nice representation of where we’re at. (As Buzzfeed News’ Katie Notopoulos eloquently put it, “I’m Pretty Sure Apple Knows We’re All Going to Die Soon.”)

It makes sense. Having wrung so much value out of the Earth with so many new gizmos created every single year—did you know that humanity produces more than 59 million tons of electronic waste annually?—Big Tech is looking to the stars for its new ideas. Maybe there’s nowhere else to go. Meanwhile, we’re all down here shuffling through the rubble. Pick your head up from time to time and wave hello to your neighbor: They probably have an iPhone.

Sources: the US government and TikTok have reached a preliminary deal to resolve national security concerns without ByteDance selling it but some details remain...

Australian data and back office services provider Link says Canadian legal software maker Dye & Durham’s $2.4B bid to acquire it has expired after...

Hands on with AptX Lossless, the new tech promising CD-quality audio over Bluetooth

How to find a lasting purpose as an entrepreneur.