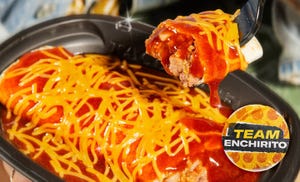 In September, Taco Bell revealed it would resurrect a discontinued menu item. Customers voted in Taco Bell’s app for either the Double Decker Taco or the Enchirito, and the latter emerged victorious.

Fans are now just a week away from taking a bite out of a cheesy, beefy, saucy Enchirito. It’ll be up for grabs from Nov. 17 through Nov. 30. (That gives you about two weeks to revisit the dish.) You’ll be able to order it online, through Taco Bell’s app or via in-store kiosks nationwide, according to the restaurant. You can also get it delivered.

Taco Bell discontinued the Enchirito in 2013. The savory item consists of a soft flour tortilla loaded with beef, beans and onions. It’s  rolled up, coated in red sauce and topped with cheddar cheese.

In its showdown with the Double Decker Taco, the Enchirito received 62% of votes, according to Taco Bell. Fans cast more than 760,000 votes. The Enchirito is among Taco Bell’s most requested items that no longer are sold, according to the restaurant.