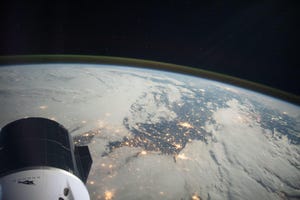 NASA is delaying a cargo flight to the International Space Station out of an abundance of caution over the SpaceX Dragon possibly breathing fire from the wrong place.

The space agency had hoped to launch the capsule atop a Falcon 9 rocket on Friday, but as propellant was being loaded into the Dragon’s Draco thruster system ahead of time “elevated vapor readings of mono-methyl hydrazine (MMH)” were detected, according to a NASA statement late Monday.

In other words, sensors detected the slightest hint of a potential fuel leak, and mission control shut everything down.

“Once the exact source of the elevated readings is identified and cause is determined, the joint NASA and SpaceX teams will determine and announce a new target launch date,” the agency said.

On Tuesday morning, NASA mission control in Houston could be heard telling astronauts on the ISS the new launch date for the mission, which is named CRS-25, is no sooner than June 28.

When it finally makes it to orbit, the spacecraft will be carrying supplies, equipment and science experiments, including a study of immunity and aging, a test of a concrete alternative in microgravity, and other investigations.