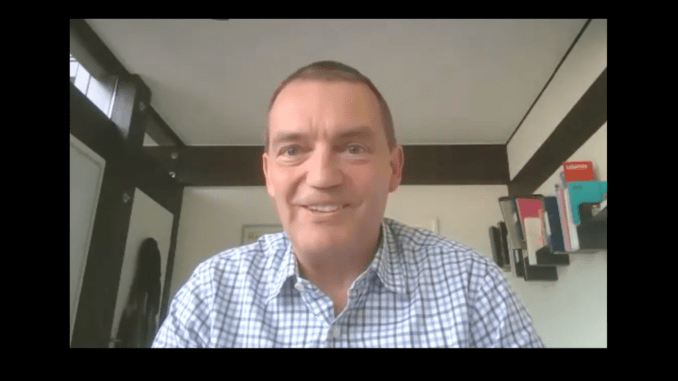 We often think of legal tech start-up founders as people in their twenties and thirties, perhaps junior lawyers who have had a brainwave and decided to risk it all for a new career path. In Simon Black’s case, who was until a couple of years ago a senior equity partner at global firm Allen & Overy, the decision to help build a start-up came in his fifties.

Now 53, Black talked to AL TV about his journey from a transaction-focused partner in Asia, including working as Managing Partner for Mainland China, to being the third co-founder of Lexical Labs, a 10-person legal tech company focused on contract review and negotiation.

(See AL TV interview with Black below, (11 mins), plus a product walk through of the Lexical Labs platform that improves and speeds up contract review and negotiation (10 mins – directly after the interview)).

The first question has to be: why do this? Why not move to Tuscany, or spend the rest of your life leisurely travelling the world in style, as some partners who have retired from the frantic world of high-powered commercial law do?

The simple answer is that Black still had a lot of energy, and in his words was ‘up for a new challenge’. He explained that he had a passion for making the contracting process smoother and also was fascinated by legal tech. He met up with Will Becker, a software engineer, and Liam Gilchrist (now CEO), who had been a lawyer at Herbert Smith Freehills, worked at a Chinese company, and been a consultant at Radiant Law, among other roles.

Lexical Labs was already in gestation under Becker and Gilchrist when the three hit it off. Black joined in early 2019 as co-founder and Chief Commercial Officer where he could put his great knowledge of client needs to use and also leverage his drive for building businesses.

As he explained, working in Asia he had been helping clients to grow their businesses in new markets, and he had also been growing Allen & Overy’s business too.

‘I am a believer that you can work through a long career provided that you reinvent yourself,’ he told this site. And that is a sentiment Artificial Lawyer can 100% support.

‘I have always had to adapt to different cultural environments and that has helped,’ he added. And that also makes a lot of sense. When you have to constantly see the world from a new perspective and relearn how things work, it keeps your mind youthful and open.

Yet, it must be very different going from a global law firm to being able to get everyone in the company onto a single Zoom call?

‘In a law firm there is an array of support for anything you need. [Also] in a law firm you see the big deals of the companies [you serve], but not the day to day running of things,’ he noted.

‘So there has been a massive learning curve. And also a big learning curve on the tech, and what is possible [with that tech],’ he added.

Despite this, Black is enthused with the prospect of growing the business and stresses that key skills gained as a partner are very relevant in a start-up as well.

‘I learnt the power of listening [to the clients],‘ he noted. He also developed problem solving skills. Together that really helps a start-up.

Last question: is Black the exception that proves the rule? Would he recommend that other partners, perhaps at the end of their legal careers, to join tech start-ups and begin a whole new chapter of their careers?

Black said that if you can find others that share the same vision, then yes. Which makes sense, as you’re going to need colleagues that bring a wealth of different skill-sets to make a success of it. But his ultimate conclusion is: ‘Go for it!‘

Good luck to Black and the team at Lexical Labs.