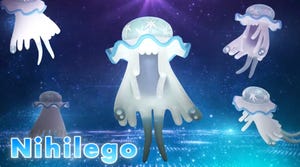 Pokemon Go Fest 2022 is underway, but the event still has a few more surprises in store for players — including the debut of another new legendary Pokemon.

Nihilego, one of the Ultra Beasts from Pokemon Sun and Moon, will make its Pokemon Go debut during the second day of Pokemon Go Fest. The Ultra Beast will be appearing in five-star raids from 10 a.m. to 6 p.m. local time, making this your first chance to capture one in the mobile game.

Nihilego is a dual rock/poison Pokemon, which makes it particularly weak to ground types like Rhyperior, Hippopowdon and Groudon. It’s also vulnerable to water and psychic Pokemon, so you’ll want to use monsters of those types when battling it in raids.

In addition to Nihilego’s appearance, a new Special Research story will be available during the second day of Pokemon Go Fest. This story will focus on Ultra Wormholes, the dimensional rifts through which Ultra Beasts travel into other worlds. There will also be new Global Challenges that players will collectively work toward completing.

Day 2 of Pokemon Go Fest 2022 takes place June 5 from 10 a.m. to 6 p.m. local time. Like day 1, there will be some exclusive features for Pokemon Go Fest ticket holders. If you don’t yet have a ticket, you can purchase one from the in-game item shop for $15.