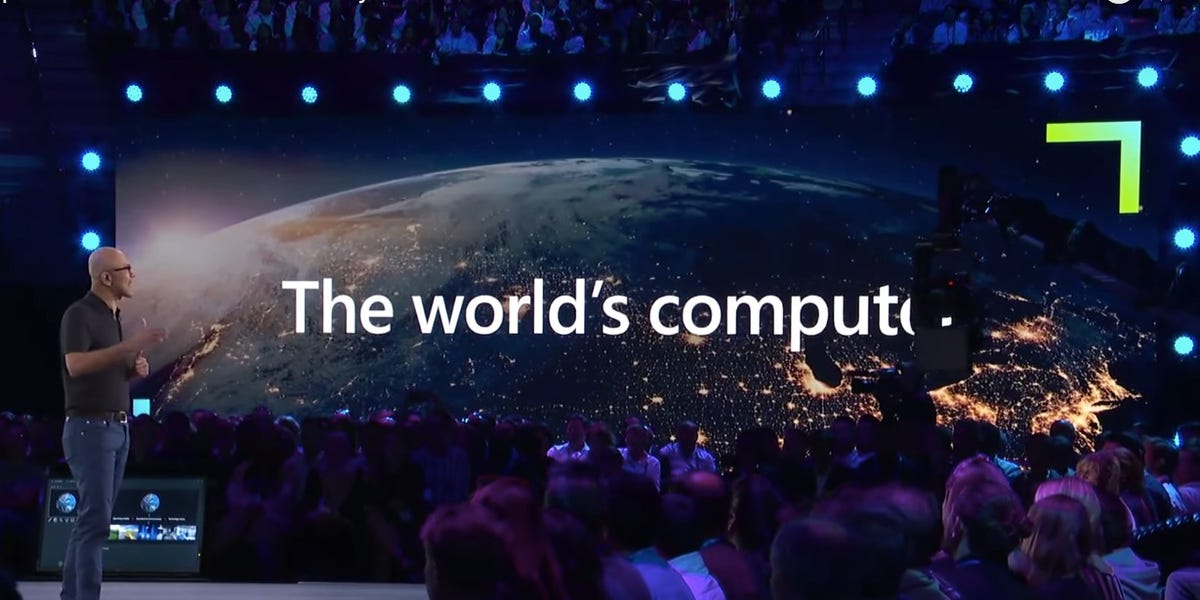 Microsoft has proven its ability to win over large business customers, helping it emerge as the number two cloud. But if it really wants to catch up with Amazon Web Services, its dominant rival in the market, it needs to keep on winning the hearts and minds of the developers who do the dirty work of building software.

It might even need to redefine what being a developer means.

This week, Microsoft held its annual Build developer conference — this year, done completely virtually  — and showed what analysts described as a renewed push to appeal to developers.

“I think for one, they’re putting a lot of focus at the high level on the developer side,” Daniel Elman, analyst at Nucleus Research, told Business Insider. “We might have thought they focused on business users. It shows that their focus is going away from the application side to the platform side and the developers using the platform.”

Part of that push also involves building tools that turn non-coders into developers with tools that require little to no coding at all. This can help companies because developers are in high demand, but there often aren’t enough people with the right skills to fill those roles.

“I believe with a lack of developers globally, this new combination can enable some very powerful capabilities,” Patrick Moorhead, principal analyst at Moor Insights and Strategy, told Business Insider.

To that point, Microsoft announced at Build that it’s acquiring Softomotive, a robotic process automation company that cut out repetitive tasks by automating them. Microsoft also added features to its Power Platform, a product that allows people to develop apps without writing code. Now, users can easily build Power Platform apps that integrate with its popular messaging app Microsoft Teams.

This appeal to developers, both veterans and beginners, helps Microsoft for two reasons for two reasons, analysts say. First, it can help them weather the ongoing coronavirus pandemic as other parts of its business may slow down.

Second of all, “courting developers” will be key to Microsoft’s cloud strategy, says Dan Ives, managing director at Wedbush Securities. Right now, its biggest cloud rival is AWS, which has long been popular among developers.

“Redmond has massive tailwinds and must give developers the updates and product roadmap into 2021 to enable Azure to further close the gap vs AWS,” Ives told Business Insider.

Acquiring Softomotive and other new launches for developers

Under CEO Satya Nadella, Microsoft has been working to gain momentum with developers by making more of its software available as open source and launching more developer tools. That strategy came to a point with the acquisition in 2018 of GitHub, the open source code-sharing site, for $7.5 billion.

Now, with its acquisition of Softomotive, it can make the jobs of developers easier, says Morningstar equity research analyst Dan Romanoff.

“The Softomotive acquisition, I think, is a really important step forward,” Romanoff told Business Insider. “Automation, bots, AI…software is heading in the direction, so I like to see Microsoft more active here.”

Besides that, it announced it would make software like its Fluid Framework available as open source, allowing developers to build apps that help employees collaborate on tables and agendas in real time, right inside their email and Office apps.

For those who are new to coding, Microsoft provides tools that allow them to build applications without having to write code. At Build, Microsoft announced that its fast-growing Teams app will also now be able to integrate with Power Platform, building apps that can automatically send messages, automate repetitive tasks, or share reports to an entire team.

“I think the last thing that was really important was the continued advancement of the Low Code/No Code Power Platform,” Daniel Newman, principal analyst at Futurum Research, told Business Insider. “Enabling rapid deployment of applications and tools within Office, Teams, Dynamics 365 and more — this has been a game changer for Microsoft and it is continuing to grow in importance.”

Finally, Microsoft announced Project Reunion, meant to unify the two major ways of building software for Windows: Win32, the classic platform, and Universal Windows Platform, the more modern runtime introduced with Windows 10. The idea is to streamline development and make it easier to modernize existing apps.

Romanoff says all of these coder-first announcements show that Microsoft is continuing its “better and more open relationship with developers under Satya Nadella’s leadership.” This move can also get more developers to sign up for Microsoft’s tools “as they can get more done with less effort,” Moorhead says.

A boost during the pandemic

Build also showcased how Microsoft is taking advantage of a big increase in usage of its products and services during the pandemic, analysts said.

Just as the company’s chat and collaboration app, Teams, sees a big surge in new users during the crisis, the company introduced new developer tools for the service, including customizable templates, chatbots, meeting scheduling features, and the ability to broadcast events to wider audiences.

“Teams runs on Azure and increasing apps built around the Teams ecosystem will in turn drive increased cloud adoption and usage,” Gartner analyst Sid Nag said. “Goodness all around for Microsoft.”

In fact, Azure is one of the main Microsoft businesses benefitting as the pandemic disrupts forces companies to rethink their business strategies and move faster to the cloud, Elman said.

“They’ve done a good job at catching customers at the beginning of their journey and making it so that Microsoft is the top of mind choice,” Nucleus Research analyst Dan Elman said. “Microsoft does a good job of getting it at the very beginning and then you’re a Microsoft person forever. It’s another step in that direction for them.”

Got a tip? Contact Ashley Stewart via email at [email protected], message her on Twitter @ashannstew, or send her a secure message through Signal at 425-344-8242. Contact Rosalie Chan via email at [email protected], Signal at 646.376.6106, Telegram at @rosaliechan, or Twitter DM at @rosaliechan17. (PR pitches by email only, please.) Other types of secure messaging available upon request.