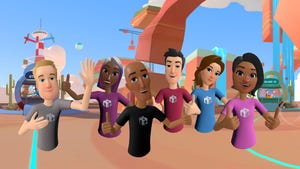 “An empty world is a sad world.” That’s reportedly one of the concerns expressed in an internal Meta document related to the company’s central metaverse offering for consumers, a virtual land it calls Horizon Worlds.

Internal documents including memos from employees show that Horizon Worlds isn’t pulling in the number of visitors Meta had hoped for, and that the visitors who do show up generally don’t head back to Horizon after the first month, The Wall Street Journal reported Saturday.

With Facebook parent Meta’s social VR platform, users can don one of the company’s Quest virtual reality headsets to explore digital spaces such as a comedy club or a concert venue as avatars. Users are also able to create their own virtual worlds. Meta first showed off the app in 2019 and opened it to the public at the end of 2021.

It’s a major part of Meta’s big bet that a larger virtual realm known as the metaverse will be the future of computing, replacing present-day social networks as well as online-meeting tools like Zoom.

“We believe that the next computing platform has the potential to be more social, more human than anything that’s come before,” Meta CEO Mark Zuckerberg said during a keynote presentation at the company’s Meta Connect conference this past Tuesday.

So far, though, Horizon Worlds seems to be having some trouble.

Meta first set a target of hitting 500,000 monthly active users of Horizon Worlds by the end of this year, later revising the goal to 280,000. But the present number is less than 200,000, the Journal reported, citing the documents. Combined, Meta’s social-media products, including Facebook, Instagram and WhatsApp, attract over 3.5 billion average monthly users, the Journal noted.

Other information from the internal docs, according to the Journal:

Meta didn’t immediately respond Saturday to a request for comment on the Journal’s report. A spokesman for the company told the publication that Meta is working on improvements to Horizon Worlds, including changes meant to keep users safe. The spokesman also said Meta continues to think the metaverse is the future of computing and that its efforts in this area were always meant to a multiyear project.

The company has reportedly gone into a “quality lockdown” for the rest of the year to address performance and other issues in Horizon Worlds, and earlier internal memos have reportedly said employees working on the project weren’t spending much time in Horizon and needed to start doing so.

In August, when Zuckerberg posted an image of his avatar to announce the release of Horizon Worlds in France and Spain, users mocked the low-quality graphics. Zuckerberg then shared a new image with a more detailed rendering of his avatar and noted that he would share “major updates to Horizon and avatar graphics.”

At the Meta Connect conference earlier this week, Zuckerberg unveiled what his new avatar looks like and said the company also plans to add a highly requested feature: legs. The company’s present-day avatars appear only as floating torsos with heads, arms and hands.