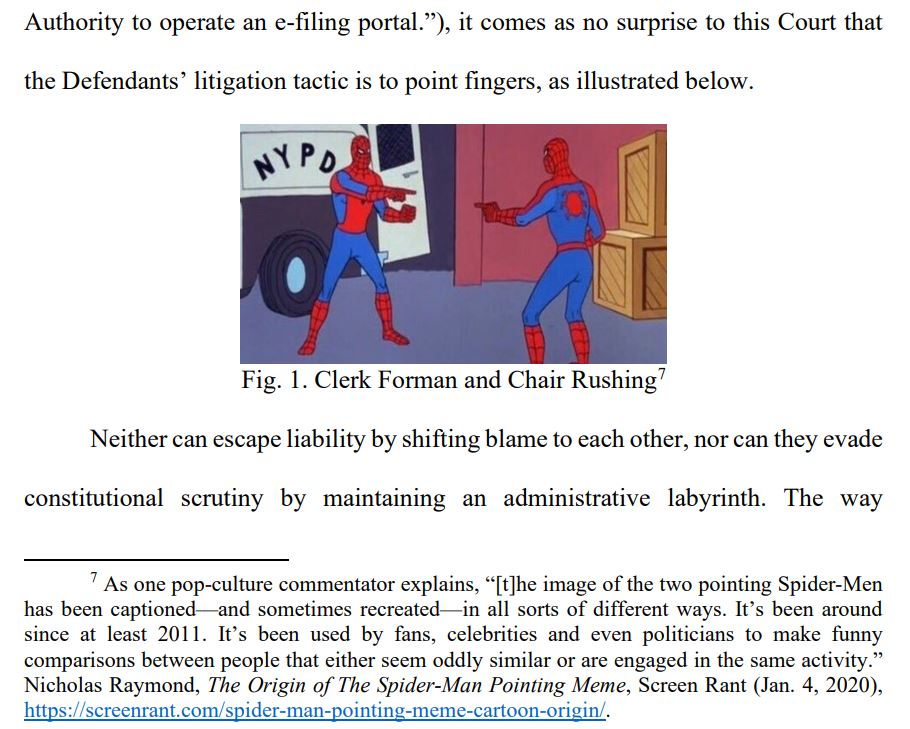 This opinion came out in June, but I just learned about it. In this opinion, a federal judge incorporated a meme into the opinion’s narrative to emphasize a rhetorical point (pun intended):

[Later, the court adds: “one final point, this isn’t Who’s on First, Defendants must move past pointing fingers at each other like the spidermen pictured above.”]

The judge used the well-known Spider-Man finger-pointing meme, which I’ve used on the blog before. Here, the judge uses it to emphasize that he sees a lot of blame-shifting between two defendants explaining why it takes too long to docket new case filings in the Broward County courts. Not only did the judge use the meme, he even labeled the Spider-Men with the names of the two finger-pointers.

It should be clear to all parties that, by using a meme to emphasize the point, the judge has no fucks left to give. This exasperation is reinforced by comments such as this: “Defendant Forman, on the other hand, does not seriously engage with this issue—or, for that matter, with most merits issues.” Ouch.

It’s always nerve-wracking to declare some activity to be the first of its kind, because inevitably some prior art materializes. With respect to memes, judges have long used quotes from famous movies, TV shows, and books to make rhetorical points. (For example, in 2006, I did a rundown of the Princess Bride quotes I could find–surely there are more now). Judges have also displayed memes in their opinions, but as far as I can recall, only as part of reciting the evidence at issue. This is the first time I can recall a judge incorporating a meme into an opinion as part of the opinion’s narrative.

I am wondering if memes as judicial opinions is a net positive. On the one hand, it expands the toolkit for judges to make their point, and sometimes a meme is worth a thousand words. On the other hand, memes often are fully understood only in limited cultural contexts, and meme often develop unwanted and unintended slang meanings. Memes can also come off as snarky or even disrespectful (the latter may have been intended by the judge). It would be a shame if meme-ified opinions coarsened the judicial dialogue–something that’s already at risk (just try reading one of Judge Van Dyke’s opinions from the 9th Circuit). So while memes can be cute or fun, I hope judges will use them advisedly.

This meme-slinging opinion author is Judge Mark E. Walker of the Northern District of Florida, who richly deserves the (slightly belated) crown of the Technology & Marketing Law Blog’s Superhero Opinion Author of the Day.

I note that Judge Walker is about my age, which means he probably grew up watching the original Spider-Man cartoon series on Saturday mornings. I’m guessing many members of our generation still know the theme song by heart. I know that if I started singing the theme song around my sister, she would instantly join in.