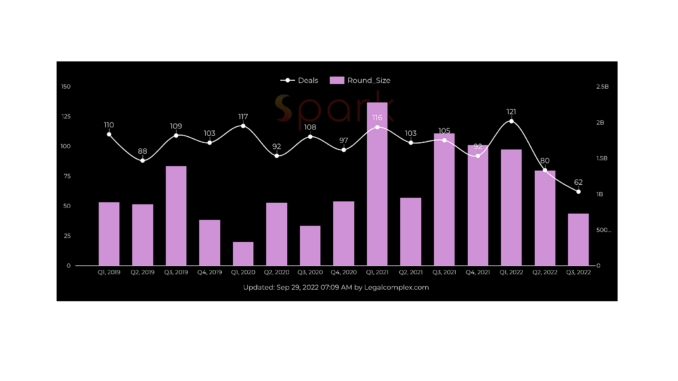 Data from Legal Complex shows that the number of legal tech funding rounds has dropped again, to 62 for Q3 2022 – which raises the question: where is the floor for this trend and what does it mean for the sector?

The information provided by Raymond Blijd, founder of the investment data company, shows that across 2019 to the present day no Quarter had so few funding rounds as the latest. The second lowest was Q2 2022 at 80, and the next lowest was not since Q2 2019 where there were 88 rounds. Generally since the start of 2019 there have been between around 90 to 115 rounds per Quarter, so the current numbers are way off the last few years’ pattern. In terms of the total value, where numbers were given, this last Quarter was around the $750m mark, which is lower than in 2021 and 2022 on average, but not too far off figures for 2019. I.e. it’s the total number of deals, or lack of, that really stands out here, (see the white line in the chart below).

Blijd said: ‘We didn’t register a single seed, grant, or other early stage round this quarter. This signifies that companies didn’t raise based on growth, but rather as insurance against no growth. In short, companies raising capital raised this Quarter aren’t using it as fuel, because they’re fasting.’ I.e. most of these rounds were for companies that are already well embedded in the market and just want to keep on going.

So, what does this tell us? It says that the VC crunch is still very much with us, especially for smaller and younger companies. But, perhaps of more importance now is: when will this end?

One company Artificial Lawyer spoke to recently said they were preparing for a lack of VC funding for the next two years. Meanwhile, Reynen Court has launched an appeal to the wider legal tech community for investment to avoid having to run a very tough Series B in the short-term.

As always, the irony is that the legal tech world is doing great. Spending on such software is broadly up, more firms are engaging with it, and the focus is very much on implementation and real use, not just experimentation and POCs. In short, this looks like an ideal time for VCs to invest….

….but we cannot ignore the wider market conditions. Those who are looking to avoid additional risk may simply look at the erratic economic signals and say: ‘OK, legal tech looks good, but all the same we are going to wait this one out a bit longer.’

As ever, and as with fixed term mortgages, the challenge is not for those who are well-funded and have plenty of runway for the next year or two, but those who are heading to renew funding in the next six months.

And that leads to the next question: when does this end? It seems unlikely that we’ll see a surge in VC funding for legal tech until early 2023 and perhaps not until Q2 of 2023, (although I’d gladly be proven wrong…! In fact, please VC folks, really, really, prove me wrong).

One positive here is that as legal tech companies bag more revenue from a growing market, the better terms they will be able to get from VCs. That said, if companies are struggling to get past the early Minimal Viable Product stage and into full revenue-earning potential that could be a problem. Likewise, those companies that have taken on $10 millions and are not hitting targets face painful discussions with their backers.

Any road, we should not freak out about this. But, after seeing 9% job cuts and a tanking share price at publicly listed DocuSign recently, we also have to be realistic about what happens when companies upset investors.

One other aspect here is M&A. To this site’s surprise, there in fact has been less M&A activity this Quarter than expected. Although there has been activity in segments that Artificial Lawyer covers – especially via Litera – the broader legal tech and adjacent markets have not yet seen a surge of M&A (see below). Although, perhaps the VC market impacts have not been with us long enough to trigger the expected deals? After all, it takes a while to run out of money and some months to cut a deal with a buyer.

If this carries on then inevitably companies will have to look at other options, and perhaps do what Reynen Court is doing and appeal to the wider market for cash. Selling out is another option. And perhaps the best option of all is to just push up that revenue by winning new customers and expanding spend from those who already believe in your product. Nothing looks better on a pitch deck than steadily increasing revenues that show how you have converted previous VC cash into real and sustained growth.

[ Note: due to additional companies’ data being added to Legal Complex some figures in past Quarters have been revised upwards. Also, it’s worth noting that Raymond’s definition of legal tech is far more broad than that used by Artificial Lawyer. ]