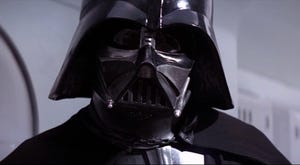 James Earl Jones, the iconic voice behind Darth Vader, has signed over rights to his archival voice work so that AI can be used to re-create his voice, according to a report from Vanity Fair Friday.

Jones, who is 91, has been actively working with Lucasfilm and Ukrainian company Respeecher on using AI to take his Darth Vader voice and keep it alive through machine learning, according to the Vanity Fair report. Respeecher’s tech was used in the Disney Plus show Obi-Wan Kenobi to help re-create Jones’ Darth Vader voice and in The Book of Boba Fett to re-create a young Like Skywalker’s voice. The report’s interview with Matthew Wood, supervising sound editor at Skywalker Sound, also revealed that Jones provided important guidance in Obi-Wan Kenobi.

Disney, which owns Lucasfilm, didn’t immediately respond to a request for comment.

Disney acquired Lucasfilm for $4.05 billion in 2012. Since then, the movie maker and theme park builder has released three full-length mainline series films and two spinoffs. Each of these projects, except for Solo: A Star Wars Story, brought in over $1 billion. The first film in the Skywalker Saga, The Force Awakens, brought in over $2 billion. By 2018, Disney had recouped its Star Wars investment.

The company has also created multiple television and animated shows, including the recently released Andor, as well as theme park attractions. As Disney continues to expand its Star Wars entertainment portfolio, it’s turning to technology to keep characters alive for a new generation of audiences as the actors age or pass away.