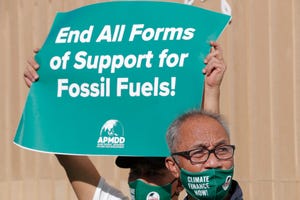 This story is part of Choosing Earth, a series that chronicles the impact of climate change and explores what’s being done about the problem.

As world leaders gather in Egypt this week to engage with scientists, nongovernmental organizations, activists and other experts to decide how best to wean society off its fossil fuel dependency, there is one set of guests at the party who are not entirely welcome.

Of the 44,000-plus people registered to attend this year’s COP27 climate summit, at least 636 are representatives of fossil fuel companies, according to research released by Global Witness on Thursday. That figure, which was calculated by Corporate Accountability, Corporate Europe Observatory together with Global Witness, represents an increase of over 25% compared to the 503 fossil fuel reps at COP26 last year in Glasgow, Scotland.

To put that into context, the fossil fuel contingent is bigger than any national delegation at this year’s conference other than the UAE, which has 1,070 delegates (70 of whom are fossil fuel lobbyists). In total, 29 countries have chosen to include fossil fuel reps as part of their delegations, with Russia bringing 33. The numbers were calculated using information provided by delegates and included on the list of registrations published by the UNFCCC.

Scientists have attributed greenhouse gas emissions from the burning of fossil fuels to be the cause of the climate crisis, leading to extreme weather events that are causing death and destruction across the world. Due to its documented history of climate change denial, greenwashing, destruction of natural habitats and human rights violations, there is significant resistance from many corners to the fossil fuel industry having a seat at climate talks.

“Tobacco lobbyists wouldn’t be welcome at health conferences, arms dealers can’t promote their trade at peace conventions,” said a spokesperson for Global Witness and its partners in a statement. “Those perpetuating the world’s fossil fuel addiction should not be allowed through the doors of a climate conference.”

Activists, NGOs and many others are wary of the motives of fossil fuel companies, which are known to invest heavily in lobbying as a way to influence lawmakers in their favor, and strongly believe they should be excluded from discussions. Instead, they want the voices of communities who are most impacted by the climate crisis around the world to be central to planning the just transition to renewable energy.

But this year at COP27, there are more fossil fuel reps than delegates from the ten countries most affected by climate change combined.

The presence of fossil fuel representatives is especially galling to Ukrainian climate activist Svitlana Romanko. She made the difficult journey to attend COP27 to lobby lawmakers to defund fossil fuel companies who she says are complicit in supporting and profiting from Russia’s war in Ukraine.

“It is abhorrent that these dirty dealers are allowed to meddle in climate talks,” she said. “Some of them are complicit in Russia’s war crimes and should be under international tribunal together with bloody petro-dictator Putin rather than lobbying at the highest levels or earning credibility, being a part of national delegations.”

The figures of fossil fuels reps also serves to exacerbate existing resentment among many African activists and climate experts that COP27 has been labeled “the African COP,” when African perspectives and voices are not being centered. Many from the continent have struggled to attend due to difficulty obtaining accreditation and visas, as well as the high prices of flights and accommodation in Sharm-el-Sheikh, the city hosting the summit.

“There’s been a lot of lip service paid to this being the so-called African COP, but how are you going to address the dire climate impacts on the continent, when the fossil fuel delegation is larger than that of any African country?” said Phillip Jakpor from Corporate Accountability and Public Participation Africa in a statement.

The influence of fossil fuel companies on climate policy is not just a concern for activists and NGOs. On Tuesday, the UN released a report full of recommendations to crack down on greenwashing in corporate net zero campaigns, including banning companies from funding fossil fuel lobbyists.

“This is about cutting emissions, not corners,” said Catherine McKenna, chair of the UN expert group that assembled the report. “Right now, the planet cannot afford delays, excuses or more greenwashing.”