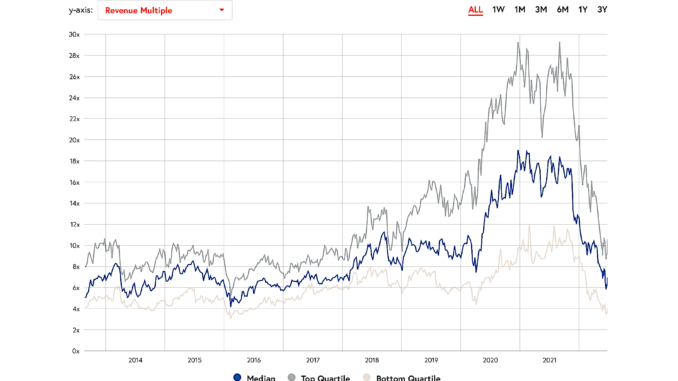 Collapsing valuations for Cloud and SaaS companies could have funding consequences for larger legal tech companies that are currently looking for major new rounds of venture capital – that is what the data and some market experts suggest.

Data from Bessemer Venture Partners’ Cloud 100 Index shows median revenue multiples dropping from 14x in June 2021 to 6.5x in June 2022. I.e. the value the investors will put on a company based on the revenue that it is generating has dropped significantly.

(And that’s a median average – some companies have seen much more extreme changes. In September 2021 the same index showed companies in the top Quartile getting around 30x – which today in June 2022 is now back down to 10x.)

Valuations of around 6.5x (see chart) are also much more in line with the historical norm between 2014 and 2018. So, this could be seen as a ‘return to normality’. Although, Bessemer is calling this drop the ‘SaaSacre’…!

And this in turn will quite likely be reflected by the legal tech sector – (we will know more as data comes in across this year.)

‘Up until 2021, calculated multiples for companies in the legal tech space had been steadily climbing. The multiples we have registered were up to 14.8x. and are calculated from the total amount of venture capital raised and the value on exit. These calculations ran on the publicly disclosed numbers of companies,’ added, Raymond Blijd, CEO of LegalComplex.

One reason for a drop in valuations – across all types of Cloud businesses – is that investors simply don’t believe such companies will grow as fast as recently expected. Ironically, many of the highest valuations in the Cloud software sector came during the pandemic – when most developed countries were experiencing severe economic issues. And to be fair here, some Cloud businesses genuinely have been growing very rapidly despite (or perhaps even because of) the pandemic – which helped to trigger some of  the ‘over-enthusiasm’ in the first place. Moreover, many continue to perform very well.

Also, market sentiment suggests that legal tech companies in particular are experiencing growing demand, from law firms and inhouse teams. But, as the sage once said: ‘Markets are irrational.’ Moreover, one change somewhere in the market can trigger a cascade of impacts everywhere else. That’s why we get boom and bust.

While there is potentially a lot of money in the market, investors are more wary of companies that have set themselves on a ‘high cash burn’ trajectory, but where the value of the company is now lower than it was before. This tends to be companies that have passed the early stages of pre-seed, Seed, and Series A, and are now onto chunky rounds, such as $50m and above – and are companies under pressure to keep spending more because of their competitors, their market segment, and their board.

As one SaaS software company CEO explained to Artificial Lawyer, using a hypothetical example to illustrate the challenge of falling valuations: ‘Let’s say that the last time you raised you were given a valuation of 30x revenue. You are making $10m revenues and hence you were valued at up to $300m, and at the last funding round you raised $30m.

‘So, you invest a lot and you now have an organisation that burns cash at $1m-$2m per month. This is not a problem if you can go back to funding any time and the cash gets you 24 months [of operations].

‘But then the valuation drops to only 7x revenue multiple. Suddenly, you are only valued at $70m. If you need to raise a significant round again [to maintain this same upward growth trajectory at the same level of acceleration and spending], this becomes very difficult.

‘First, this would mean giving away half of the company’s equity [to get that level of cash]. So, the round gets reduced to only $10m-$20m. But with your current high running costs that is not enough. The money would not last for as long as you need it to.

‘Investors would see all of this, look at how much the company raised before, and then politely pass on the invitation to invest in the new funding round. Many big companies have this problem at the moment, if they are burning a lot of cash.’

The market expert then noted that smaller legal tech companies would face far fewer challenges because they had not yet become dependent on a very high cash burn rate. For example, as recently noted by this site, smaller investors in startups, such as Zach Abramowitz, are still very much interested in early stage legal tech investment deals.

Moreover, as they are early stage, and in some ways almost ‘proof of concepts’ still, financial expectations are a lot lower in general. Investors are just hoping the company gets going and eventually builds a client base and an OK income, rather than hoping the tens of millions of dollars they have given will result in a company with many, many times larger revenues in the mid-term.

In short, if you take a lot of the VC ‘rocket fuel’ then you have to deliver on expectations. The challenge is that those expectations can – as seen over the last couple of years – become detached from the fundamentals of the market.

Last word goes to an experienced legal tech investor from a major VC fund. They told this site: ‘I think you’ll see everything slow down. It’s going to come down to need to have vs nice to have.

‘I think there is a counter-cyclical nature to some of the legal tech products, but not all. This entire market will see a return to fundamentals and business metrics.’

As noted before by Artificial Lawyer, it’s going to be bumpy for some companies, but in the long-run, coming back to a more realistic funding environment will be for the good of the legal tech sector as a whole.

One last point – if the investors are concerned about the revenues a company is making, then legal tech companies really have no choice but to press ahead with their growth campaigns – especially where that expenditure may result in building their sales pipeline. While sitting on their hands to save money may retain cash for longer, you can’t make more money if you don’t generate new clients.