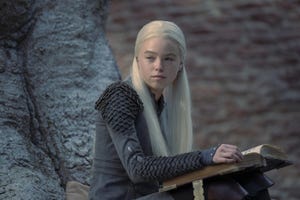 Milly Alcock has been one of the most regular highlights of House of the Dragon, HBO’s Game of Thrones prequel. The 22-year-old Australian actor plays Rhaenyra Targaryen, who in the premiere episode was controversially named heir to the Iron Throne. We’ve always known, however, that Alcock’s time on the show wouldn’t be permanent, that at some point she’d be replaced by Emma D’Arcy.

That time is Sunday, when episode 6 of House of the Dragon drops.

There’s a significant time jump in between episodes 5 and 6, as revealed in a teaser for next week’s show. We see the older version of Queen Alicent (played by Olivia Cooke, not Emily Carey) mentioning that Daemon Targaryen has left the Stepstones unprotected for over a decade — meaning the time jump is for at least that long.

In Alcock’s place is Emma D’Arcy, an English actor who starred in Simon Pegg and Nick Frost Amazon series Truth Seekers. Carey and Alcock are the only actors to get replaced with the time jump. Matt Smith is still Daemon Targaryen, and Paddy Considine is still King Viserys — except, from the episode 6 trailer, he looks like a very sickly King Viserys.

House of the Dragon tells the story of the Dance of the Dragons, a Targaryen civil war that, according to GoT lore, is the beginning of the end of House Targaryen. It takes place 190 years before the birth of Daenerys Targaryen. In episode 5, which aired Sunday, Rhaenyra Targaryen married Laenor Velaryon in a tragic ceremony following a fight, and subsequent death, breaking out at a wedding feast.