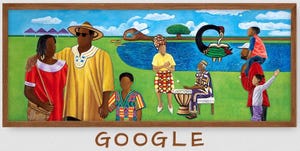 In addition to being Father’s Day, Sunday is also Juneteenth, an annual holiday celebrated every June 19 to commemorate the end of slavery in the US. To celebrate both occasions, Google created a Doodle that spotlights the Black family and fatherhood while exploring the meaning of emancipation and freedom.

The holiday celebrates the day in 1865 when Union Army Maj. Gen. Gordon Granger arrived in Galveston, Texas, to read a federal order abolishing the institution of chattel slavery in the state.

Slavery was abolished in the Confederate states two years earlier when President Abraham Lincoln issued the Emancipation Proclamation, declaring “all persons held as slaves … shall be then, thenceforward, and forever free.” But Texas, a holdout state where enslavement continued, was geographically remote from Washington, DC, at a time when news traveled slowly.

While Lincoln’s order abolished slavery in Confederate states, it was still legal and practiced in the Union border states of Delaware and Kentucky until the 13th Amendment was ratified in December 1865.

The Juneteenth National Independence Day Act was signed into law last year by President Joe Biden, the first new federal holiday since Martin Luther King Jr. Day was added in 1983. Around the country, the Juneteenth holiday is marked by celebrations, gatherings and marches honoring the struggles and sacrifices of Black ancestors.

The Doodle — the work of Virginia-based father-son guest artist duo Jerome and Jeromyah Jones – pays tribute to both Father’s Day and Juneteenth with artwork that show that bridge between multiple generations, with a focus on education, joy, community and the meaning of emancipation.

The pair said Juneteenth is important to them because it marked a great milestone in the Black struggle for liberation.

“This notification that our ancestors received 157 years ago is an essential catalyst for contemplating what freedom looks like for us today as a people,” they told Google. “The celebration is a special commemoration because it highlights good news for a change that was given to a people who were once in chains.”

Coupled with the unity of cultural events from years past, the artists said they were inspired by the significance of the two holidays falling on the same day this year. The pair describe the symbolism represented in their acrylic and oil paint creation:

The hand in the background symbolizes the descendants of those who were emancipated on June 19, 1865 and the children of fathers in the generations that follow. The brush is a metaphoric representation of the bridge that connects the roots to their fruits. If we were to give our Google Doodle a title we would call it Painting in The Footsteps of Our Freedom. Painting in the footsteps means we are giving color to the past so that the legacy will be visible to every child in class. The red, black, and green Sankofa bird looking back is symbolic of opening the history book in our laps to close the generational gap.