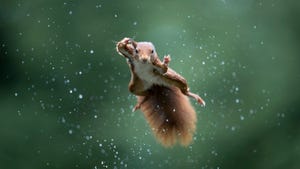 Nature is full of wonders, but it’s also full of whimsy. On Thursday, the Comedy Wildlife Photography Awards announced the finalists for its annual photo competition celebrating the funny side of nature. The images run the gamut from fish to fauna, and each one is a delight.

The mammals are particularly plucky this year. A squirrel caught in mid-leap on a rainy day looks like it’s a superhero. A lion cub attempts to descend from a tree and ends up doing so most ungracefully (don’t worry, the cub was fine). There’s also a remarkable shot of three bear cubs sitting together in a way that makes them look like one cub with three heads.

Check out the full gallery of 2022 finalists, or scroll through a curated selection of my favorite images:

The photo competition has been around since 2015 and is open to professionals and amateurs alike. The awards are meant to bring a smile to your face, but they’re also focused on raising awareness and funds for wildlife conservation.

You can vote for a People’s Choice Award through Nov. 27, with the award winners announced on Dec. 8. It will be fun to see which hilarious images reign supreme, but really we’re all winners when we get to gaze upon a stumbling zebra that appears to be farting a great cloud behind its rump.

Is Asynchronous Reprojection the Future of Gaming?

Amazon Kindle Scribe vs. Oasis: Which Is the Best Premium eReader?

Educators: We Must Be Champions for Our Trans Students – EdSurge...