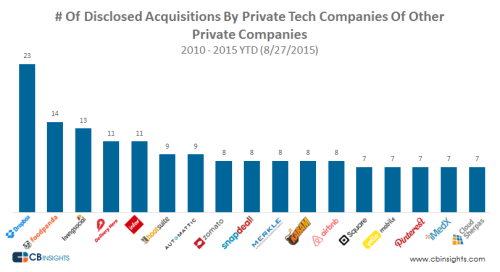 Recently I had some discussions with investors and founders about the state of investments in tech companies. We also discussed the outlook and my investment strategy going forward.

I posted several times my disbelieve in B2C focused investments due to the development of Internet giants in that space. I monitored the trend of those companies rather developing their own products based on their own technology stack rather than acquiring those startups and CBInsights Tweetstorm seams to agree with me. The exception of this trend were Yahoo and Microsoft. We will see soon if those two companies will change their strategy regarding B2C, but my assumption is they will. Yahoo rather based on their overall strategy shift and Microsoft based on their experience with these kind of deals. Both will be saturated with deals for one reason or the other very soon. Startups acqui-hiring other Startups was also a long term hope for investors as we have seen over the last years. But this will end also when those companies will focus on their own core products. There are companies like Zalando being on a acqui-hire strategy recently after their announcement on Slush to grow the tech team substantially.

In this world where Amazon can pull a Netflix and a Spotify business from a technology perspective just like that and pushing this new service to the Prime customers for almost no price risking a 99% loss making margin there is no room for a profitable business model of a one-trick-pony like those two companies. The end is near for both of them if they focus on the technology platform with their slowly shrinking user base. The real defendable assets in a world dominated by Internet giants lies in content and user base. Sounds simple.

A huge loyal customer base acquired over years is a defendable asset. This user base has grown over various businesses and years. Amazon customers will stay the same as Google and Apple customers as long as the companies keep them happy with new products and additional services. Just be on the watch so your customers will find what they want in your own shops and not being forced to look somewhere else. Streaming music, on demand videos, online storage just to name a few commodities these days. You might have some time — 2–4 years tops — for evaluating a new service. But after not too long you have to offer it to your customers to keep them loyal with your cash cow businesses. Ask Apple for iPhone and Google for Google Apps. Innovate and keep the common features included in your basic offerings. In a complete digital world everybody can move to new service — especially when it is a new service and migration is not blocked by legacy.

The other unique asset is content. With content comes exclusivity — to sell your commodity services with. In commodity services prices will turn to zero. If everybody offers it there is no need to pay for it from a user perspective. Once a product reaches a commodity level the price will go away. Only exception of this rule if royalty fees are connected to this service, which can only be connected to content when your product is pure digital. This will not apply to hardware obviously where patents are the comparable value to content royalty fees in the digital age.

Latest with Taylor Swift taking off here content from Spotify and than later signing an exclusivity deal with Apple Music this has become very obvious. Apple is struggling to move over users to their own service even while having direct ownership over their iPhones. Why is it difficult for Apple? because the service is commodity — aka equal to Spotify and other competing services — and prices can not be pushed to zero due to royalty fees for labels and musicians. What is left to challenge the competition is content. This leads to exclusivity deals with the leading stars of the industry. Those services who own the Top 5 actors will take over the industry. So expect more Apple Music deals with musicians from this list: Drake, Rihanna, Ed Sheehan, The Weekend, Kanye West, Eminem, Nicki Minaj, Beyonce, Arianna Grande, Lana del Rey. Bare in mind that Taylor Swift pulled here music from Spotify so she can not be on this list. There are some calculations what Adele and Taylor Swift non streaming strategy will have in the future for those companies.

The content paradigm is true for gaming as well. So the rational behind high exit valuations for Supercell, King and others is just based on their IP for certain games. Like movies for studios those games will have a defendable assets for the future. Distributing and publishing games will generate a user base, which lowers customer acquisition costs (good old economy of scale). Ownership of games IP will provide the fuel to keep the fire burning. Gaming studios can be replaced and rearranged. But the original IP has a higher value. If the IP lies with the studio, this will become the target for some trade sale activities.

Because investors can’t invest in those large scale user base of Internet giants they will focus on content and creation of IP. Those are interesting times with high risk and high rewards metrics for investors. Welcome to the good old times of ‘content is king’ rational for investors. We haven’t heard this in a very long time.