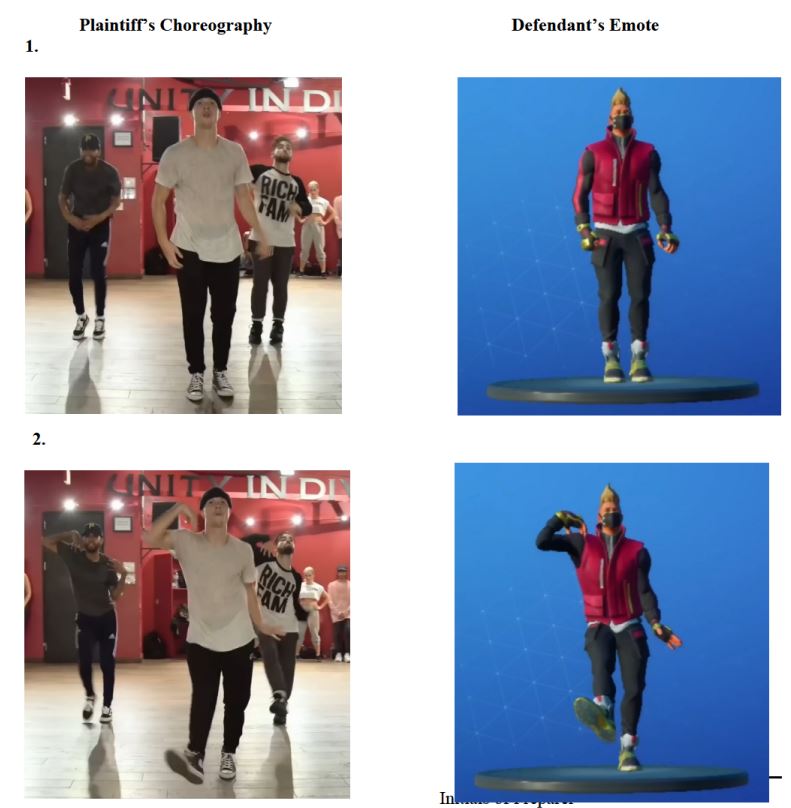 Kyle Hanagami is a choreographer. He made a video called “How Long” featuring his choreography. It now has 36M+ views. Fortnite offered an emote called “It’s Complicated.” “Ten of the poses in the video and the emote are the same.” Hanagami sued Epic for copyright infringement.

The court shows the moves at issue side-by-side:

There is no doubt that Fortnite “copied” the video. However, I’m confused by side-by-side #1, which is just the character standing, and #11, which does not seem to match the lead or right dancer and is materially different from the left dancer.

The court starts with the uncontroversial proposition that “choreographic works are composed of a number of individual poses that, when ‘viewed in isolation,’ would not be protectable.” Citing the Copyright Compendium, the court says “Plaintiff’s Steps resemble the Floss, the Carlton, or other examples in the Copyright Compendium” that weren’t copyrightable. I’m sure Hanagami is thrilled to see a court analogize his choreographic works to the Floss, the Carlton and, later, the Running Man. Devastating.

On the continuum of choreography, the Steps are closer to a short routine like the “Floss” dance or to the “U, S, A” movements, neither of which would not be protectable. Numerically, the Steps make up as small component of Plaintiff’s work, suggesting that the Copyright Office would not register the two-second Steps as a discrete work.

Thus, “the two works are not substantially similar, because other than the four identical counts of poses—which are unprotected alone—Plaintiff and Defendant’s works do not share any creative elements.”

This case reiterates that individual dance moves aren’t copyrightable and are free for everyone to use. At the same time, the choreography of a full dance routine should be copyrightable–and it would likely be infringing if a second comer copied the routine completely and verbatim. But this case is in between those extremes, because the defendant took 10 moves (according to the court’s count). So why did the defense win? I’m unclear exactly what the court is saying. The court implies that if each move is uncopyrightable, stringing together 10 of them remains uncopyrightable. This can’t possibly be right, though, because that would be like saying that if each word in a literary work is uncopyrightable, the entire literary work must be uncopyrightable–which we know is not the case. Or is the court saying that any sequence of 10 dance moves is always free for others to take, at least if the total routine has a much larger of moves total, but taking some larger number of dance moves would not be? Confusing.

Whatever the rationale, this opinion reinforces that emotes are legally clean and likely could never infringe. This enhances the Pellegrino and Brantley decisions.