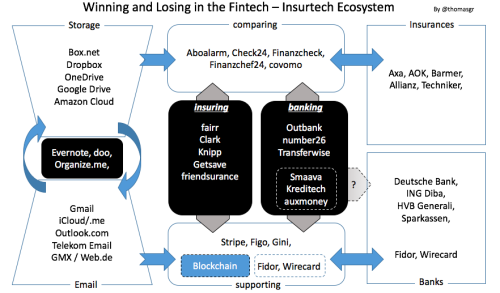 Find my update to this post from May 2017 here.
http://thomasgr.tumblr.com/post/161101958885/winning-in-fintech-insurtech-ecosystem-big-win

I know that there are so many experts out there in #Fintech and #Insurtech right now. I respect them all: founders, investors, analysts and journalist. All of them bet on new players, new models, new ways of banking and new ways on providing insurances. But I have a different view and we all can only see so far into the future.

So here is my simple view on the ecosystem and I will update the picture over time. I start today to share my view just to have a discussion moving on in this interesting space.

While a lot of experts coming from a technology and disruptive perspective I take the view of a consumer of the financial services industry. This might be new and surprising for a lot of the readers, but I still believe user’s demand will drive the way forward.

Main Areas of this ecosystems

Users will start from documents in my model. It could be contracts, invoices, recipes, offers, etc. Those documents in their digital format will reside in a cloud storage which is either a pure storage provider (Dropbox, onedrive, google drive, etc.) or, for most of the users, the unlimited email inbox (gmail, outlook.com, in Germany gmx/web.de, Telekom Email, etc.). From my perspective there will be no other location where users will store their documents outside their homes. That is why vertical storage providers (Evernote, doo, organize.me, others) have or will fail in the midterm. Online Storage is already free of charge, is part of a larger offering and its included with general consumer services. Similar to premium email services, which became free of charge with gmail in 2004.

The main partners for users regarding financial transactions today are banks and insurance companies. Currently a lot of interactions are triggered by transactions (money transfers, damage claims, etc.) and comparing offers (Check24, Aboalarm, etc.). So there is a ‘love & hate’ – relationship between banks/insurances and those comparing sites. They need them to get new customers in an overall saturated market while those websites are the main reasons for churn on the other hand. This is the same in other industries like telecommunication, travel and others. For sure those comparing sites will stay in the ecosystem for good.

At the receiving end we will see the regulated institutions of banks and insurances. While a lot of new fintech and insurtech startups aiming to enter this markets most of them will not reach this area due to high costs and regulatory demands. But please try hard to do so just don’t tell afterwards nobody told you it is a huge challenge — including raising tons of money during the period of setting up such an institution.

In case my assumptions are correct we will see: