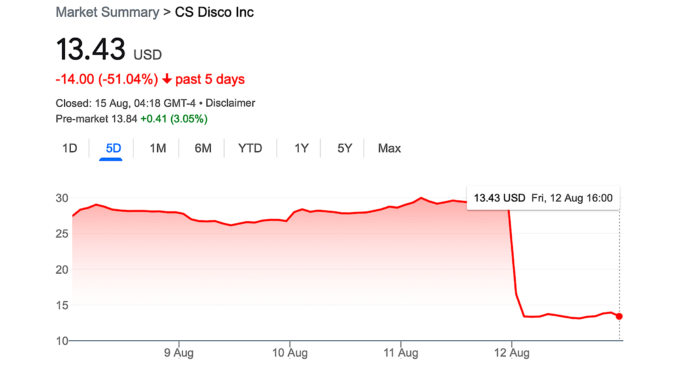 The stock market is irrational, so the saying goes, and no doubt some of the executives at publicly listed eDiscovery company, CS Disco, must be wondering why its shares dropped by over 50% in value last Friday.

As this site has mentioned before, the challenge with a public listing is two-fold: first you have to be totally transparent and give up all your financial data, and secondly that analysts are brutal if they detect even the tiniest signs of slowing growth or of not meeting expected targets.

As seen at the end of last week, on Friday, August 12, the shares of Disco, which are on the New York Stock Exchange, were absolutely hammered, dropping by more than half their value in one day. This follows an ‘interesting’ period for the business that has seen its stock price shunt up and down during a tough time for software companies, with its stock now trading overall at less than 70% of its opening debut.

Now, you may say: ‘Who cares? Why does this matter?’ It matters because if your share price tanks it makes it easier for other companies to take control of you – if they fancy it. I.e. a strategy that is meant to drive company A in a certain direction ends with company B taking it over and moving it in the direction that it wants to go in. (Take the example of Twitter and Elon Musk – it’s not so much about one person or company owning another, but that the new owner can, quite legally, do whatever they want to their acquisition.)

So, what’s happening? According to investor site The Motley Fool, even though Disco is doing well by many people’s reckoning, it unfortunately missed, or it expects to miss, some key targets that investors were focused on.

And that all looks really good. But, the Motley Fool stated: ‘The company had previously said 2022 revenue would be in the range between $149m to $153m, but management cut its forecast to the new range of between $132m to $136m.

Now, a drop in predicted income by what amounts to around 11% at the upper range doesn’t really seem to be a big deal, especially considering that legal tech’s long-term growth prospects are very rosy. In fact, selling a company’s stocks because of a short-term dip in growth expectations seems severe.

However, you have to look at this in the wider context of collapsing SaaS software valuations, and the US, and other major economies, facing a recession.

Of course, you could argue that with a recession comes bankruptcies and spats over financing arrangements, and that all creates disputes and so creates a demand for eDiscovery software providers like Disco. However, it would appear that key analysts didn’t feel this way.

Conclusion: doing an IPO sounds like a wonderful thing. In reality, the stock market is both incredibly unpredictable and intensely fickle.

But what about the other legal tech companies that are listed?

Well, LegalZoom has had a bit of a positive bump recently, and Intapp has recovered somewhat from a low in June this year. Nuix, another eDiscovery company, is still doing….er…how can we put it….rather badly, and is down 90.57% since its debut. (Although Nuix may be a special case given the ‘disclosure scandal’ it faced, as the Sydney Morning Herald described it.)

Last word: the good news is that…stock markets are fickle. So, the dramatic drop for Disco could also reverse, and by the end of this week they could be motoring upwards again.

Moral of the story: don’t do an IPO unless you really like dealing with wild rides.