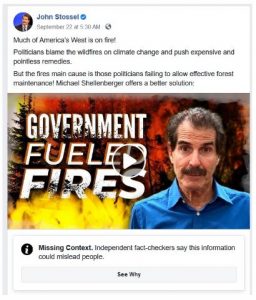 John Stossel has over a million Facebook followers. He posted two videos that triggered fact-checking responses from Facebook. The first video, “Government Fueled Fires,” downplayed the impact of climate change as the cause of California’s annual forest fire conflagrations. Facebook added a “missing context” legend that said “[i]ndependent fact-checkers say this information is missing context and could mislead people.” Facebook downgraded the video in its algorithm, which dried up the video’s traffic and revenues. The second video, “Are We Doomed?,” challenged claims by “environmental alarmists.” Facebook added a “partly false information” legend that said “[i]ndependent fact-checkers say this information has some factual inaccuracies.”

Stossel sued Facebook and its fact-checker for defamation. Specifically, with respect to the Fire Video, he claims that Facebook imputed a fact statement to the video that he didn’t make. With respect to the Alarmist Video, he claims that Facebook maligned his reputation by saying he made false statements. The court grants Facebook’s motion to dismiss AND anti-SLAPP motion, meaning that Stossel will be writing a check for tens of thousands of dollars to Facebook.

Facebook’s fact-check program, as practiced generally and in the particular instance of the Fire Video, reflects a subjective judgment about the accuracy and reliability of assertions made in the content that has been checked…Simply because the process by which content is assessed and a label applied is called a “factcheck” does not mean that the assessment itself is an actionable statement of objective fact.

Thus, “the disputed attribution nevertheless is not a statement of objective fact about Mr. Stossel or his reporting, but rather the reviewer’s subjective interpretation of the Fire Video’s contents.” Plus, “the facts that form the basis for the “missing context” assessment are disclosed in the Forest Fire Article linked to the “Fact Check” button.” This is yet another example of how linking to sources can turn the associated text into non-actionable opinion. See, e.g., this post.

The court says this is largely the same question as the Fire Video: “the application of the “Partly False” label to the Alarmism Video as part of Facebook’s fact-checking program reflects a subjective judgment about the accuracy and reliability of assertions made in the video.”

Facebook is a “public forum” for anti-SLAPP purposes (but that doesn’t make them a state actor–that argument has already failed) and climate change is a major topic, so the “statements were made in a public forum and concern a matter of public interest.”

What Does “Fact Check” Mean? To non-lawyers, this ruling may be baffling. Facebook publicly called its interventions “fact checks,” but in court Facebook indicates that it’s not actually presenting “facts” to check Stossel’s claims. Instead, Facebook is arguing (and the judge is agreeing) that Facebook checks Stossel’s facts by presenting contrary opinions. Not that it would matter to the legal outcome, but I wonder if a consumer survey would indicate that consumers perceived Facebook’s interventions as “facts” or “opinions.” From the advertising context, this situation reminds me a little of the legal fiction of “puffery,” which courts treat as legally non-actionable even when there is persuasive evidence that puffery changed consumer behavior.

Fighting Climate Change. Our Earth is burning up and we are saddling our youth with problems they may not be able to fix. It boggles my mind that redressing climate change is not the most urgent priority of every politician. Thus, it makes me angry to see folks working to oppose earth-saving measures–ESPECIALLY when they profit from their opposition.