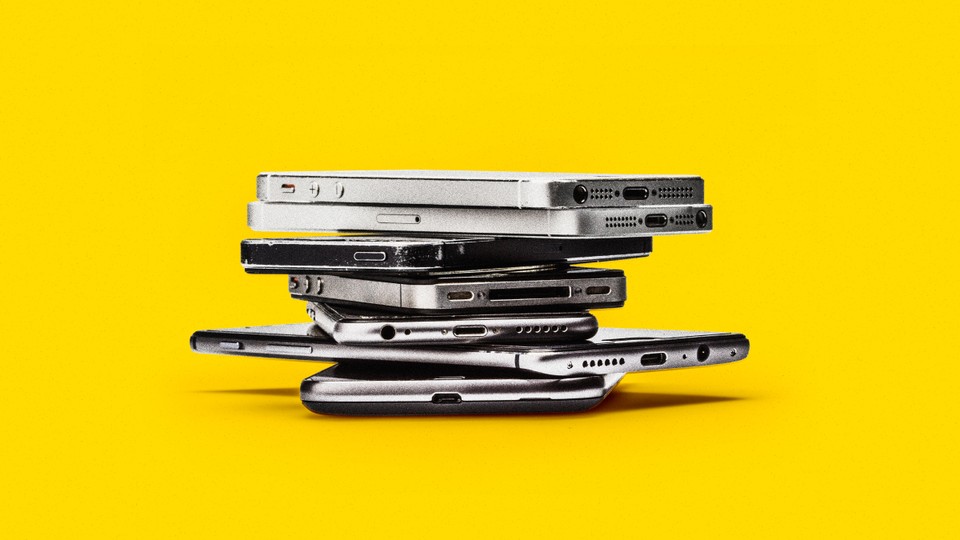 The original iPhone SE is a great little phone, and I love it. It has a headphone jack—remember those? It fits in a butt pocket. It was announced in the Obama era.

Sure, the first one I owned, which I purchased in 2017, had only 16GB of storage. And yes, I was forced to stop using it after a terrifying incident in which it refused to update to the latest iOS, even after I deleted nearly everything on it, which prevented me from installing the Ticketmaster app that I needed to enter a Harry Styles concert that I had flown to California by myself to attend. (Would you believe someone at the arena simply agreed to print the ticket out? I was crying.) After that, I bought a refurbished iPhone SE with 64GB of storage for $165. I eventually stopped using this one, because the camera was so bad that it was upsetting my friends. Also, a small part of the screen stopped working—right in the spot I had to press to switch the keyboard from letters to numbers, which meant I had no access to punctuation and came off, via text, as very cold. And I couldn’t log in to my bank account.

Finally, last fall, I upgraded to a refurbished iPhone 7 ($159, a steal!) that came with twice as much storage as my previous phone, which I felt I needed for all the photographs I would be taking with its marginally better camera. Now, as the world celebrates the release of yet another new iPhone—or four new iPhones, rather—I’m having a moment of reflection. (It’s autumn.) I don’t want any of the four new iPhones, because I already have three others—one of which I use, and two of which are beloved but mostly busted. A woman should not just keep acquiring phones indefinitely.

I have been holding on to these old SEs, going so far as to pack them up and move them to a new apartment, because I don’t actually know what I am supposed to do with them. It hurts my feelings to think of parting with them, remembering how many dramatic iMessage conversations they’ve contained and how many of the strange incidents of youth they’ve seen me through—the awkward parties, the unfamiliar side streets, the times I really needed to Find My Friends. One of them is in a beautiful red-and-blue rubber case with a water feature on the back—tiny, glittery stars that move around as if in a snow globe, which always enchanted me and the toddlers on the subway.

I know that you are not supposed to put batteries or, naturally, things containing batteries into a trash can. (They can explode.) I know there is such a thing as electronics recycling, and, with a quick Google search, I have become confident that either the city of New York or my nearest Apple Store would take the iPhones off my hands, as would some random person, probably, if I put them out on my stoop. And after perusing the zero-waste forum on Reddit, I know that all kinds of options exist for abandoning old gadgets. There are bins at Home Depot and Best Buy; there are friendly little neighborhood shops in totally random parts of town. There is even a place in Sammamish, Washington, that will accept old TurboTax CDs.

But what is the best thing to do with an old phone I loved? To my surprise, after asking a bunch of people, it seems the answer is: Recycle as a last resort. Find a way to use it instead.

You see, recycling doesn’t really work for gadgets like the iPhone. “There’s no way to take a truck full of old cellphones, melt them down, and make new cellphones,” Kyle Wiens, the CEO of the repair group iFixit, told me. “It’s not possible.” Elaborating, he said that it’s easy to repurpose the aluminum that makes up the bodies of a lot of our gadgets, but it’s not yet possible to recover a bunch of the other materials (such as neodymium, which is apparently used to make tiny magnets).

When I spoke with Wiens, he was getting ready to go to the E-Scrap Conference, in New Orleans. Still, he suggested that instead of recycling the phones, I put them to use. I could turn them into webcams or music players. The webcam suggestion sounded funny to me at first glance, but it’s a thing people do. The music-player alternative seems more up my alley, because I don’t like wireless headphones and would love to be reunited with the SE’s headphone jack. I could load the thing up with all the albums I purchased in college using the iTunes gift cards that aunts and uncles were giving teens at the time in honor of every major holiday (Miley Cyrus’s Bangerz, the Inside Llewyn Davis soundtrack, etc.).

Josh Lepawsky, a geography professor at Memorial University of Newfoundland and a co-author of Discard Studies: Wasting, Systems, and Power, agreed with Wiens on every point when I called him up. If he were in my shoes, trying to find a use for an old phone that didn’t work exactly right, he would “definitely use it.” If I’m ever concerned about my phone being searched, for example (because I’m a journalist, or because anyone may have a run-in with the police), I could resurrect one of my old SEs as a burner phone that I never connect to my Apple ID. He also suggested I might set it up as a second phone with a separate phone number that I don’t give out in public and share only with closest friends and family. (Appealing air of drama.) Recycling, he said, should be a last resort.

Lepawsky has written extensively about electronic waste as “a conglomerate of discarded digital things [set] apart as deserving of special attention in part because there is so much of it”—59 million tons generated every year. By the time you have a device in your hand, he argues, most of the waste and pollution have already happened. Recycling isn’t going to undo them. And modern electronics involve more diverse materials packed together into tinier spaces, making them harder to recycle. “It’s either very difficult and very costly or time-consuming to disaggregate them into their constituent materials first,” he said. (Again, the neodymium.) Some materials are amalgamated, or bonded at a chemical level. “At this point there are no technical means to disaggregate them and recycle them.”

The two also shared feelings about the dreaded substance glue. They hate it. If a device is put together mostly with screws and can be taken apart using standard tools, then a consumer has a good chance of repairing it herself. If it’s put together with glue, it becomes much easier to break things while trying to disassemble them. “Your garden-variety laptop is very easy to fix. An iPad is glued together and is a little bit challenging to fix,” Wiens said. “It’s very fast and easy to manufacture. It’s not very easy to unglue it without breaking the very thin glass.”

Read: Seriously, what are you supposed to do with old clothes?

Lepawsky is an advocate of “right to repairability,” which he says is the step beyond “right to repair”—a popular political movement in favor of legislation that would help people fix their electronics. Right to repairability is more about having the right to own things that were not assembled with glue. But if you can’t repair something perfectly, you still don’t need to recycle it, he told me. He tried to repair a laptop and ended up tearing a hard-to-reach cable. The laptop’s ports are all useless now, except for its DVD drive, meaning the laptop can be used as a DVD player.

If all else fails, Wiens suggested I could sell the phones to a resale site like Gazelle—but it turns out they actually won’t take original SEs, so that’s not an option. Another obvious answer is to bring them back to an Apple Store. The company says it has an extensive recycling program and will take just about anything, though, again, the recycling process is not going to be fully redemptive (even if it employs fancy robots). The iFixit office has a 55-gallon drum for unsalvageable electronics, which gets picked up by the major recycling company ERI every few weeks. Before Wiens throws something in the drum, he usually tries to remove its battery first, though this is sometimes difficult. “What needs to happen is products need to be designed to where it’s trivially easy to separate the battery from the product,” he said. Then people could recycle things more easily, and cause fewer fires in garbage trucks. They would also have an easier time repairing their things and understanding the objects’ interiors, so they might become more committed to holding on to them for a long time. They would do their little part to stop throwing partly toxic junk into the ground.

But as it stands, the choices are limited and complicated. If I keep my old phones as burner phones and webcams, and buy only used devices, and try very hard to make them last, then what—do they go into my grave with me? My impulse is to get them out of my sight! Unsurprisingly, however, Justin Ashford, the host of the Art of Repair YouTube channel, joined the chorus and told me not to recycle my SEs. He suggested I deconstruct them so that I can learn how to repair my current iPhone, if it ever breaks. “If you have even an inkling, a feeling of taking something apart, just go grab your old phone and take it apart,” he suggested. I said I wasn’t going to do that, just because I wanted to be honest.

If I felt I absolutely must recycle my phones, he told me, I should take them to a local repair shop. “If you’re okay with them using it for other things, you can take one device and give life to 20,” he said. Or, if I wasn’t buying that this was really the case, he guessed I could take them to a recycling drop-off location and say, “Hey, where does this stuff go? Where does it actually go?” And maybe someone would tell me.