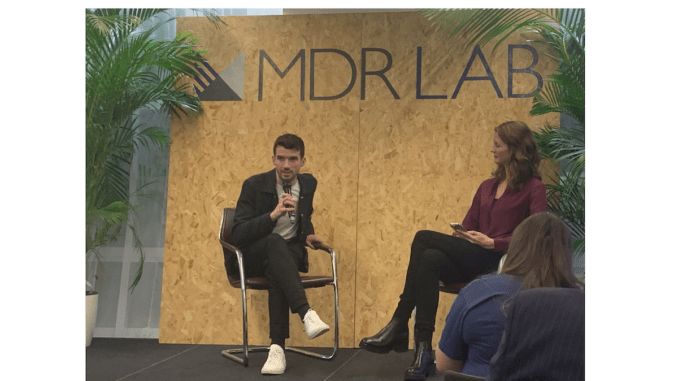 Although the legal sector is estimated to be around $900 billion globally, when it comes to growing a startup only targeting lawyers could be a hinderance to long-term expansion and later stage funding, suggests Tom Wilson, investment partner at VC fund Seedcamp.

Wilson was sharing his views at the MDR Lab Showcase event last night (see previous story). Asked by Jenifer Swallow (pictured with Wilson), who was emceeing the event, about the prospects for legal tech startups, Wilson made several key points, and the one that really struck Artificial Lawyer was this: ‘If your pitch is as narrow as legal tech then that is not in your favour later on [when looking for additional investment, such as A and B stages.]’

‘Legal tech has not supported that many companies that have hit £100m [in revenues].’

He noted that the challenge is that although pre-Seed and Seed investors may be happy to get involved with a company that is starting off in what they see as a niche area, e.g. legal tech, later on when bigger investments are needed and larger funds are doing an analysis of whether you will ever become a really global company and make a great return for them, then the legal sector can be a challenge.

Wilson also said that another problem with software in the legal market is that it can get stuck inside a jurisdiction, e.g. company X is really only well-fitted to English law, or perhaps at best Common Law.

Now, you could say that if you can crack the UK and then the US market (and the latter is estimated to be worth around $400 billion or more) then you still have a massive market to grow within. Add to that parts of Europe and parts of the Asia-Pacific, and you surely have a big enough market to address?

But, Wilson has the view that what big investors want further down the line is a company that can be sold into all enterprises and that can span multiple sectors. Companies like that have greater guarantees that they will breach the £100m barrier and then keep going all the way to the billions in revenue one day. And that reassures investors.

Plus, one could add, in the current market assuring investors is really important if you have already started on the VC journey and are soon going to use up your cash ‘runway’.

These are all very good points, and it’s true that very few legal tech companies that have started in the last five or so years have reached £100m in revenue. Meanwhile it’s also true that very few of them have gone beyond the legal sector. Some have played at the fringes of insurance and financial services, especially on the contract side of things, but not many have gone beyond that.

But, Artificial Lawyer would say in response: maybe we just need to accept that? Maybe a company designed to help lawyers perform their work better will ONLY really be useful to lawyers and we should just adapt to that, and so should the investors.

Maybe it’s better to be an investor in what is a relatively small pond? Of course, it seems nuts to say $900 billion is a small pond, but in some ways it is. Other sectors for software are much larger. One recent estimate found that the global financial services market had revenues of $25,588 billion in 2022.

Also, just because a market’s revenues are $X billion, doesn’t mean all of the people in it may one day be using your software. Take AI-driven doc review, for example. At present, and given the cost of the products and need for lawyers to deal with issues such as accuracy and training, the reality is that mostly it’s large law firms and big inhouse teams that use these tools. They are a small percentage of all lawyers on the planet.

Is there any contract review tool made for lawyers that has revenues (on its own and not part of a conglomerated platform) that are over £100m? This site would say probably not…yet. In fact several of the better known brand names are still in the single millions in revenues and that’s after quite a few years of operating in the market.

In eDiscovery it’s a different story, largely driven by America’s vast needs for software to support discovery for its equally massive litigation market, and Relativity is a good example of a company that really has hit the levels big investors get excited about. Meanwhile, DISCO has even gone for an IPO.

Litigation research, dominated by Thomson Reuters and LexisNexis, is also vast – and again, heavily driven by the US disputes world in terms of revenue generation.

But will that change? Will other products from deal management tools to doc review products grow to the £100m-plus revenue level? Yes. The key is scaling * – see note below. Look at CLM – some are already there and others will get there eventually. Why? Because there are a lot of companies in the world that need this product, also you can sell to the legal team, the procurement team, the sales team and more. It can be seen as truly enterprise software.

And that of course brings us back to Wilson’s point re. the future is all about becoming an enterprise software company, not just a legal tech one.

Yet, as shown, in some areas you can hit the big league with just a legal focus. Although, how many chances are there to build rivals to what is there in areas such as legal research and eDiscovery? There’s always some chance you can do it, but the incumbents are heavily connected to the market and will be hard to move off their pedastals.

So, maybe Wilson is right? To grow you need to diversify into other sectors?

But, at the same time, lots of legal tech tools simply CANNOT move into other areas, not unless they build whole new product lines, which is possible in theory, look at Hewlett Packard, IBM and many other giants, they continually reinvented themselves and built new divisions. Although that’s easier for a company that is already well established and has tons of cash to spend on such massive strategic moves. It’s not easy for a startup to even contemplate doing this.

To conclude, although Wilson is probably right on several key points, i.e. it’s tough to scale a legal tech company rapidly to over £100m revenue, for many companies here that is the reality they will just have to live with. Moreover, not everyone wants to build a unicorn. Of course, if you cannot tell the investors that one day you will be worth a fortune, then they may not want to invest later on.

Which leads us to the final conclusion: maybe the legal tech world needs more investors who really know the sector well and can stay with it from seed to A, to B, C, D, E and beyond and can live with the realities of a smaller and niche market? Maybe we just need more specialised legal tech investment funds, not just at the early stage level, but at the later stages as well?

What do you think?

[ Note * – it’s also worth separating out the products that companies might buy, compared to those law firms might buy. It would seem likely that to truly scale law firm products, then prices for some specialised tools will have to come down significantly so that more firms can use them around the world. Specialised legal tech tools made for law firms CAN scale up inside the legal world, but they will likely need to change their business models to really hit the very large revenue numbers talked about here. If you only sell to the Global 100 law firms then you will always be limited in terms of growth. ]