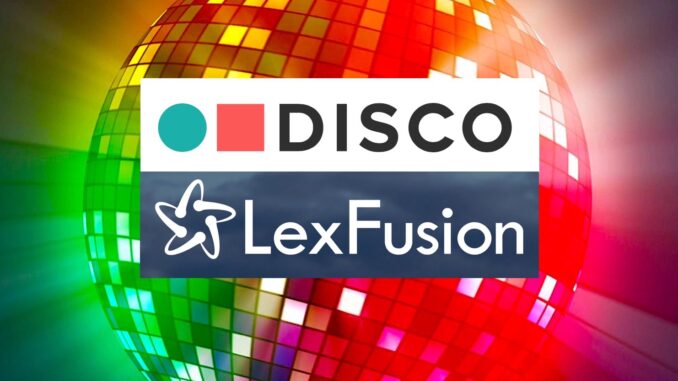 LexFusion is a collective of legal tech software providers, where the executive team of Borstein, Casey Flaherty and Paul Stroka, approach potential clients on the companies’ behalf in order to achieve a sale.

Members of the consortium that have been announced since is 2020 launch, include:

In a statement to mark the move, Andrew Shimek, Disco’s Chief Revenue Officer, said: ‘LexFusion has their finger firmly on the pulse of the legal industry — they understand the business need to embrace the cloud and automation, as well as the challenges that can come when undertaking transformational change. We are honoured to partner with LexFusion and, together, help guide legal professionals on their journey to incorporate technology to drive better outcomes.’

The moves comes, as reported by Artificial Lawyer, that Disco’s share price halved in one day (on August 12 – see story) after investors responded to lower than expected future growth predictions. Although, as noted before, the expected shortfall is really not that big and underlines just how fickle the stockmarket can be.

Artificial Lawyer asked LexFusion’s Borstein some more about the new addition and the group’s overall success so far.

‘Market listening is at the core of the LexFusion value proposition. Through thousands of conversations, we became convinced there was, finally, a strong appetite for exploring alternatives to Relativity.

We performed considerable diligence and satisfied ourselves that some of the currently available alternatives are not only viable, but represent material advances relative to the status quo. Some truly interesting tech has matured in the last few years. Disco is, unquestionably, a tech leader, but not without competition on that front.

But while truly advanced tech was non-negotiable for us, it is also not everything. In particular, a remark from a seasoned practitioner I interviewed really stuck with me because it so well-articulated my own reaction. To paraphrase only slightly: ‘You can use very advanced functionality without advanced training. It’s intuitive and beautiful.’

While not quite as prolific as you, I’m likely in the top one percentile of people who have spent years of their life looking at various forms of legal tech. ‘Beautiful’ is a rather uncommon adjective in our space. Paired with ‘intuitive’ it reflects an elegance that gets to the heart of true design. Design is not just how something looks, it is how something works – with the visual cues being fundamental to a superior user experience.

The Disco UI/UX was, for us, a true differentiator, along with the attendant services and pricing. The former (services) was familiar to us in the best possible way, as I discuss in the next answer. And the latter (pricing) was shocking in a way we didn’t anticipate but found not only delightful but potentially paradigm shifting.

Did they come to you or did you ask them to join?

We always choose our members. But it is a two-way street.

With Disco, there was a deep personal and professional connection. I worked with Umair Muhajir for almost a decade, from Pangea3 to Thomson Reuters to EY. Without qualification or reservation, I will say I consider him the best manager of review in the world – as well as its deepest thinker. Umair joined Disco a year ago as VP of Managed Review. It would be hard to overstate what a signal of the commitment to quality that was for me, and for Paul Stroka, LexFusion co-founder who also worked with Umair and me at TR and EY].

That relationship alone wasn’t enough for us. And it certainly was not enough for Casey Flaherty, LexFusion co-founder and notorious harsh grader. But Umair and the team he’s built, and is building, was a material factor in our decision. Just as I am sure the relationship with Umair and other new, key Disco executives was an important consideration for Disco in deciding to become a LexFusion member.

As LexFusion approaches our second anniversary, we’ve learned important lessons about partnering with our members. Quality of the product or services remains the threshold consideration. But the way we work together has a profound impact on the magnitude of our shared success.

And how are things overall? how is LexFusion going now?

Outstanding! In August 2020, LexFusion was only Paul and me preparing for an October unveiling. By the end of 2022, LexFusion will be a full-time team of seven.

More important than LexFusion’s expansion is the continued growth of the network of customers we help navigate an increasingly crowded legal innovation landscape. Our law department and law firm connections keep introducing us to peers in need of assistance.

Every new node in the network strengthens the value of the network for each participant—here, Casey would make some nerdy remark about Metcalfe’s Law and non-linear growth.

The attendant market listening has increased our ability to help our members achieve problem/solution fit and enabled us to slowly transition towards more of an accelerator model. While go-to-market will always be fundamental to how we support our members, our capacity to help them shape their roadmaps will be where we make the most significant impact on the ecosystem. LexFusion is, ultimately, an ecosystem play.’

Thanks Joe and good luck with the whole consortium!

[ Note: according to Wikipedia – Metcalfe’s law states that the value of a telecommunications network is proportional to the square of the number of connected users of the system (n2).]

Where is Professional Development Headed in Law? Find Out at This Virtual Conference