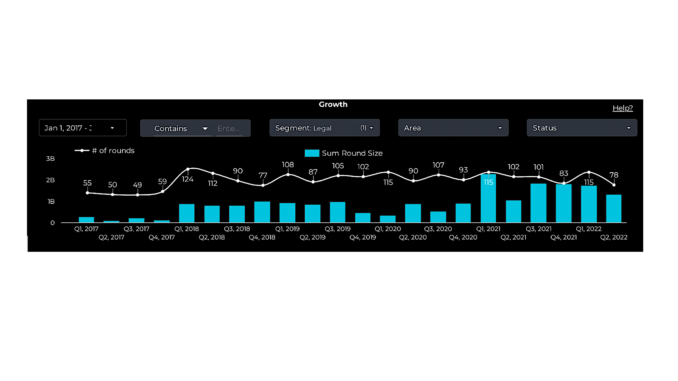 New data from Legal Complex shows that the expected VC investment crunch for legal tech appears to have arrived, with the lowest number of funding rounds this Quarter since late 2018 and with a notable drop in the total value of investments.

The last time we had so few funding rounds for legal tech was in Q4 2018, where there were 77 rounds. In short, after a period of stellar investment activity there is now a discernible drop.

And even though the market has Quarters with a wide range of deal and value amounts, what we have now is a drop in both the volume of deals and the funding totals.

For example, Q2 2021, had a lower total funding value than now, but it retained a high level of deals. While Q4 2021, had much higher values, but with a dip in deals. This Quarter, i.e. Q2 2022, we have experienced a double drop – less deals and less total value. That suggests there is a genuine slowdown in investment activity, at least for now.

We’re going to need to see more data across the year to get the full picture, but one could argue that we have seen at least one company receive a round that seems to be less or not much more than a previous round, and this week also witnessed Gavelytics close – with funding issues listed as one of the reasons for this.

The question now is what will this mean? As noted before (see above article links) this may mean we have ‘down rounds’, i.e. companies getting less cash than previously, which can cause issues if they have adapted to spending perhaps $1m to $2m a month, yet funds no longer want to support that level of expenditure – not unless the tech company can reassure people about how much new revenue and additional clients they will generate in the near-term.

For the smaller companies the picture is more complex. As noted, some funds that focus on Seed or pre-Seed level startups – which are high risk and take time to grow – may not care, as the downturn will be gone by the time these companies mature. However, other investors who are not perhaps specialists in the legal tech field may simply turn away from risky investments, just as they are doing in other sectors of the software market. I.e. specialist investors who know legal tech inside out may feel they understand all the risks and timescales involved, while those more general investors will feel unsure and back off.

Here’s what Raymond Blijd, founder of Legal Complex, said: ‘The drop aligns with what is happening in the broader venture financing ecosystem. Inflation has dampened the growth perspective of most software companies. This has caused the value of companies to drop. One tell-tale sign for lower valuations is when the latest round is either the same, or less than the previous round of funding.

‘We see a similar pattern in M&A activity. We registered 22 acquisitions announcements for the 2nd Quarter of 2022. That is half of what we registered in the first Quarter of 2022. The amounts disclosed in total was $134m, which is -87%  less than the previous period in 2021. And in 2021, we recorded the most acquisitions ever. [Note: M&A data is only for those deals where figures were publicly available – so this is indicative rather than a total merger picture as many transaction values are kept secret].’

So, there you go. But, as said before by this site, the reality is – and you’ll see it if you look at all the data, including the valuations – that the last two years have been outside the historical pattern. After such a rapid expansion in funding and valuations across all software sectors it was perhaps inevitable that there would be a dip, with the current economic climate acting as the main trigger.

However, the long-term story for legal tech remains the same: the legal sector is evolving and it is bringing in more and more tech to support the changes it needs to make. That process is only going to accelerate in the years ahead. Along the way, the market – as with all markets – will experience ups and downs, but the overall trend is clear: legal tech is growing as a sector and will do so for a very long time to come. Investors should keep looking at the wider macro-picture, so too legal tech founders and customers, because that trend points in one direction: upwards over the long-term.

And that’s a nice thought to end on.

Holiday Info – Artificial Lawyer is now on annual editorial holiday and will not be publishing until Monday, July 18th. Hope you all have a great couple of sunny weeks and if you are also taking a break have a nice holiday! See you all later this month!