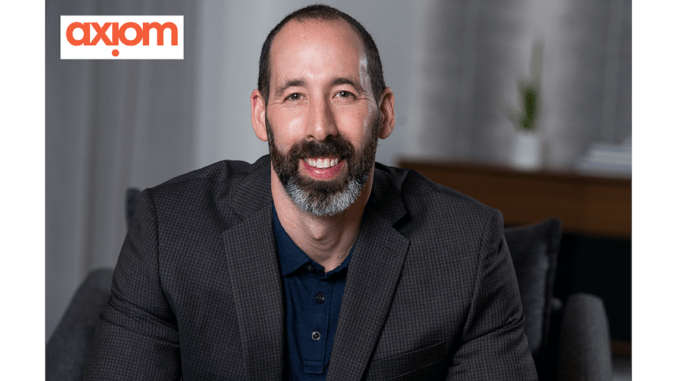 Axiom started back in 2000 and pioneered the lawyers on demand strategy. It’s also given rise to two ALSP offspring: Factor and Knowable. Today, the business is wholly focused on flexible legal talent, so just as we enter a cooling off in the market Artificial Lawyer spoke to David Pierce, Chief Commercial Officer (CCO), about where the organisation is now and what it offers lawyers looking for an alternative to their day-jobs.

First, some background. Pierce (pictured) has been with Axiom for around 12 years and is based in San Francisco. He’s also previously worked at US firm O’Melveny, and THX, the Lucas Film spin out, among others.

Straight out of the gate Pierce has a key point he wants to make and it’s a very topical one. Law firms are witnessing a slowdown in work after two incredibly busy years. Inhouse legal teams are also under pressure to cuts costs as businesses prepare for some kind of recession.

And this is exactly where Axiom can help, he stated, because when people are worried about bringing on permanent staff then flexible providers like Axiom are perfectly suited to fill the gap.

‘We’ve been through three economic downturns,’ he noted and added that each was different for their clients.

However, they also had one thing in common: ‘We have helped companies with hiring freezes through a slowdown.’

‘In the past, (referring to the pre-split days), we were spread over several businesses merged into one and that meant lots of compromises. So we made the decision that the three businesses were better on their own. That means that Axiom now is focused just on legal talent,’ he added.

He stressed that this matters because to do something well you have to specialise. (And worth noting that Factor helps corporates with contract management and negotiation, while Knowable has a JV with LexisNexis and helps companies gain clarity into their legal data using human experts and NLP in a very CLM 2.0 kind of way.)

‘If you specialise you do very well. The opposite is also true,’ he noted.

And he concluded, despite all the talk about technology, the one thing that really occupies GCs’ minds is people.

‘GCs are focused most on human talent and that is where they spend the most time and money,’ he stated.

All well and good. But, where is Axiom now? It has around 6,000 lawyers working with it in one way or another, all over the world. That would make it the same size as a major global law firm, albeit most of its lawyers are working in a very flexible way.

He then noted that times have changed in terms of how companies view on-demand lawyers, and they are valued in the same way as permanent staff. Pierce also stated that the gender split is about 50/50 – breaking down another cliché about flexible lawyering.

They work in a number of ways. Some are embedded with a client and ‘work the same hours as the rest of team does’ at a client, others work a few days a week.

‘They find the balance that they want. They tell us what they want and we provide that,’ Pierce explained.

He added with pride that they have a 90% utilisation rate in terms of the hours a lawyer in the Axiom system wants to be available, so not too much sitting around waiting for the call to come in that you have a client to help.

Pierce then noted that Axiom is not just a benefit to companies that have frozen their hiring, or perhaps laid permanent staff off – they are somewhere where talent can find a home.

‘We are a refuge,’ he stated. ‘During a downturn more people will seek refuge and they will look for companies that thrive no matter which way the wind blows.’

Another factor here is cost – especially during a slowdown. Pierce noted that some senior lawyers at major firms are commanding $2,000 an hour – but people will accept that as they are getting real quality input from them.

‘But what they don’t like is $650 an hour for the second-year lawyer,’ he pointed out.

Which leads him to conclude: ‘GCs will have to engage in a rethink.’

And that rethink Axiom no doubt hopes will see corporates look to flexible providers for more support.

Aside from the impending downturn and its refuge status, what is next for Axiom?

Axiom, he concluded, will match the steady digital movement of its clients. But at the end of the day they are all about one thing: talent and providing a home for those that want something else.

Building Legal Tech Solutions for Your Clients: The How + The Why?

Employer Productivity Tracking in the Wake of Work From Home