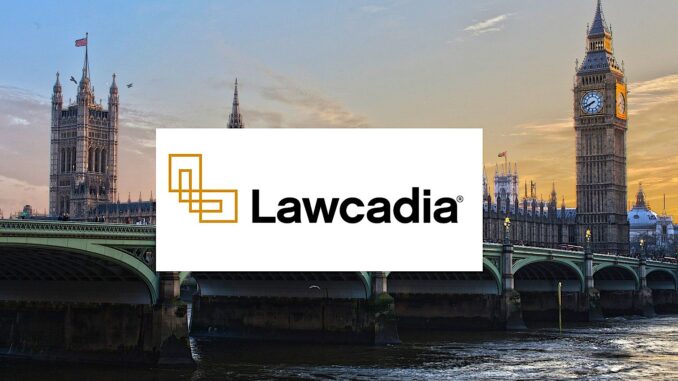 Lawcadia, the Australian legal operations platform for inhouse legal teams and their law firms, is formally launching a base in the UK from which it hopes to drive significant growth.

Lawcadia’s Head of Operations, Eryn Bowles, who in August was named ‘Legal Operations Professional of the Year’ at the Australian Law Awards, is spearheading the expansion here.

Meanwhile, well-known inhouse adviser, Mo Zain Ajaz, has also formalised his advisory role with the company. He had previously agreed a strategic partnership with Lawcadia last October via his Midlands-based LEx360 consulting firm.

Sacha Kirk, Lawcadia Co-Founder and CMO, told Artificial Lawyer: ‘It is important for us to be seen as having a formal presence in the UK in order to expand and grow in the region.

‘Having a long-term valued leadership team member lead the UK expansion is incredibly valuable as we can transfer the business knowledge and culture across the regions.

‘A lot of businesses fail when entering new markets because they haven’t done this successfully. Under Eryn’s leadership we will be growing the UK team in the coming months, along with continued support from our Australian and Philippines divisions.

‘We are cautiously optimistic that the UK will soon represent a sizeable and strategic part of our operations.’

Lawcadia’s CEO, Warwick Walsh, added in a statement: ‘Having an on-the-ground presence in the UK is something we have dreamed about for a number of years.

‘We want to push the boundaries of what is possible for legal operations and in-house legal departments, and that is what working with LEx360 brings – it is only through strategically challenging the status quo that innovation and ideas emerge.’

At the same time, the company is also launching ‘The GC’s Ultimate Dashboard’, which is a legal ops metrics reporting system, to support its growth plans. Lawcadia worked closely with Ajaz on its development.

Commenting on the product, Ajaz said: ‘Each of [its] dashboards focus on an important part of the extended legal function [showing] high-level reports and deep-dive analysis, all underpinned by Lawcadia’s process-driven technology.’

This is all part of Lawcadia’s wider offering, which is focused on how law firms and inhouse teams interact, often in relation to pricing and legal spend. Inhouse legal teams get ‘structured intake and triage, streamlined workflows, and greater control of budgets and law firm engagements, plus configurable metrics and dashboards’.

The company added that law firms can also benefit from its platform’s client intake and collaboration portals, which can provide ‘improved project management and the creation of bespoke regulatory workflows, [that are] supported by reporting analytics’.

Is this a big deal? One can see this as part of a steady globalisation of legal tech companies – which has been going on for years, but does seem to be accelerating now. Companies in Australia and other Asia-Pacific nations often head to the UK when globalising, so too plenty of companies based in Europe – given that it’s the second largest legal market in the world. There is then, sometimes at a later date, and occasionally at the same time, a push to build a foothold in the US market – the largest legal market on the planet by a very large margin.

Neither the US or UK are easy to break into, given that both have strong home-grown legal tech companies of their own covering most market segments – plus there is a very active transatlantic flow of activity between the two.

But, companies have to go where potential customers are if they want to keep expanding and it’s hard to imagine a ‘global legal tech company’ without a strong presence in the US and UK.

The main challenge with international growth is the resources it requires and the top-level staffing that it demands to be effective. As many law firms found in the late 1990s and early 2000s, building globally really needs the right people, especially those who can connect successfully with local clients and navigate what could be a very different market in terms of competition from other players, deep-seated relationships with local incumbents, and a host of challenges related to a different marketing and sales culture.

In this case, going from Australia to the UK – another Common Law, English-speaking nation, with a large appetite for legal tech tools – should not be such a leap into the unknown. Moreover, having Ajaz on your side, with his experience of the UK inhouse world will certainly be helpful.

Preparing for the Legal Team of the Future – Adam Curphey (TGIR Ep. 176)