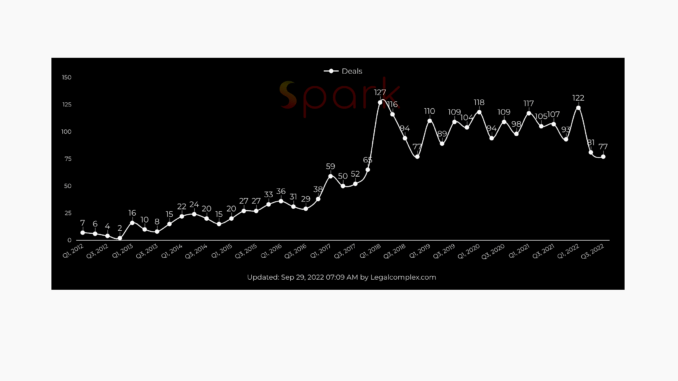 Legal tech funding and the financial markets have taken a hit recently, but the longer-term picture shows a different and more positive story, with the number of legal tech funding rounds soaring over the last ten years.

Back in the early Teens of this century, such as 2012, the number of legal tech funding rounds per quarter was less than 10, e.g. in Q3 and Q4 of 2012 there were just 4, then 2 rounds respectively. Today that would be unthinkable.

What this chart by Legalcomplex shows is that from around that time, legal tech investment started to accelerate and has not really hit a significant dip until very recently, and even then this is due to plenty of wider macro-economic causes rather than there being anything especially ‘off’ about this sector.

As you can see, 2012 was a year when if you’d mentioned ‘legal tech’ to a group of investors some may well have – and understandably – replied: ‘Uh? What’s that?’

But from then on things pick up. The average number of investment deals goes from 10 a quarter, to 20, to 30, to 50, and then in around 2018 it goes wild. Although there have been peaks and troughs, and we are certainly in a trough at the moment, quarterly investment deals fluctuated between around 80 and 120 from Q1 2018 until very recently.

These last four years show that the investment world has truly embraced legal tech: the chart shows hundreds of investments just in the last few years.

That is not going to just evaporate, even if the fund managers are no doubt putting pressure on the tech companies to 1) cut costs and 2) drive up revenue. Pushing those companies to sell now is not a great move for a lot of VCs, and in truth many companies have not had enough time yet to really show their true potential. So…..stick with it if you can is the message.

Also, if you look at the second table below, courtesy of the Global Legal Tech Report from a couple of years ago, one can see that there was a surge in new legal tech companies between 2015 and 2019 – and this also drove up the number of funding rounds. Most of those companies are still with us and they are also where plenty of the VC cash is invested. That doesn’t just stop. VCs are committed now to a change in the market we can trace back to some years ago.

But the pessimists will still want to know the answer to this question: will the current dip become permanent, or even get worse, and will we then descend into the tiny numbers once seen back in 2012?

Artificial Lawyer does not believe that the wider macro-economic picture says anything especially negative about legal tech at all. Do some legal tech companies overestimate the size of the addressable market, especially over the short-term? Yes, they do. Do some companies publicise totally daft valuations, e.g. $30m revenues but claiming they will soon be a unicorn? Yes, that happens as well. And will some companies go bust? Yes, and that is totally to be expected, even in ‘normal’ market conditions.

Plus, it’s worth noting that this site has heard on the grapevine that aside from the well-publicised cuts, e.g. at DocuSign, several other well-known legal tech companies have shed headcount in the last six months to reduce their cash burn, but are otherwise in stable shape. They realised they can’t go back for a solid funding round anytime soon and so need to extend their runway, even if they are still growing their revenues.

So, this sector has its challenges, but overall it’s in robust shape with a mass of investors deeply committed to an ever-growing number of legal tech companies. And even though there are far less new startups than back in 2016, they are still arriving year on year. There is also a ton of ‘dry powder’ in the VC world just waiting to be spent.

To conclude, if you are looking for cash today, then Artificial Lawyer has huge sympathy for you and your company – it’s a tough time to be looking for new money. But, if you can hang in there and keep going, the longer-term picture is a positive one because the pattern of investment that started some years ago is not about to vanish even if the next quarter or two are going to be tough for many.

P.S. Raymond Blijd, CEO of Legalcomplex, commented: ‘Short term, we don’t expect the fourth quarter to show any improvement, but the early signs of new rounds coming in are encouraging. We hope to see recoveries by the end of the first quarter next year. Those are traditionally the strongest showing for VC funding.’

He also noted that the Q3 2022 numbers have been revised upwards due to rounds that were not initially picked up by Legalcomplex.