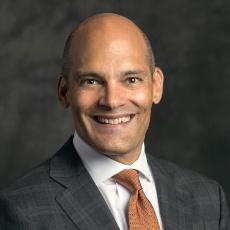 In the U.S. it has reached virtual parity with Visa and Mastercard in the number of companies which accept its cards.

“Ninety-nine percent of the places that accept cards accept Amex,” Joabar said. Members want to know that if they pull out an Amex card it won’t be turned down by a merchants who doesn’t accept it.

“Members said they wanted us to have more coverage.The card members are spending more and we are giving them more places to spend,” Joabar said.

Sales have been good because of pent-up demand for travel and entertainment, traditionally strong areas for Amex. Growth has also resulted from the company’s decision several years ago to use a hybrid acquiring model, he added.

“We have multiple channels to sign merchants. We have a proprietary team that signs large merchants like Delta and Marriott, but we also made the decision to use partners, either traditional acquirers or payment facilitators like Square, Stripe, PayPal and Intuit, to sign merchants on our behalf.”

American Express offers a variety of rewards for card members, he added, cash back on some cards or rewards like air miles or hotel nights.

“We have some of the best co-branded partnerships such as BA or Delta, who have great reward currency. They offer us low-cost channels to acquire card members plus rewards that give customers an incentive not only to spend but also to pay their bill back, so it drives great behaviors.”

Because American Express operates a closed loop it collects excellent data on users and has better control over fraud.

“We can provide merchants with a rich data set and provide analytics to understand how to grow their business.”

Merchants like the card because its holders tend to spend more than people who use Visa and Mastercard, he added.

“I would consider them more of a premium card, given their history with rewards, said Marco Salazar, director of payments at Javelin Strategy & Research. “Amex rewards will always be very competitive for consumers who are willing to pay the annual fee.”

Amex recently signed a partnership with i2c that will bring fintechs onto the American Express network.

“We want to make sure we can continue to grow the number of cards that ride on our network so more and more merchants see our cards at point of sale,” he added. “i2c sends a signal the Amex network is open to fintechs.”

Amex recently signed Abra, a digital asset financial services company that will offer a card on the American Express network that transacts in U.S. dollars and offers crypto back on any purchase category and amount. It also lets users trade over 100 different cryptocurrencies, earn high yield on digital assets, and borrow against crypto holdings.

The deal shows that Amex is open to working with fintechs, Joabar said.

“This is a space where the fintechs are playing — crypto, NFTs — that world is emerging and the best way to learn is to partner with people who are thinking of these things everyday.”

“Premiums cards, such as Amex, stand to benefit greatly from a rebound in travel since, they’ve been focused on travel for decades for their rewards component. Any increase in travel and entertainment will boost anyone, especially Amex which built their cards around those concepts.”

In the future, the cards that can adapt their rewards programs quickly will have an advantage, he added.

“We just got out of the pandemic where issuers changed rewards from travel to other types of spending,” he said. “If we get into a recession, that will dramatically change how consumers spend. Will cards be ready to shift their rewards on spending?”

Salazar said one of big initiatives at American Express is Amex Send, in partnership with Venmo and PayPal which lets users split purchases or send or receive money through their Amex account.

“Think of it as a bridge to a real-time experience and it’s already embedded in the account,” he said.

American Express members can enroll through the web page.

“Amex is developing initiatives and launching products that will compete in today’s payment landscape and in the one that’s coming,” Salazar said. “The company is tech product led — they are more advanced in the sense of becoming a tech company.”

Which Fintech Trend Should We Be Paying Attention To? – Finovate

The changing role of the bank CIO | Bank Automation News