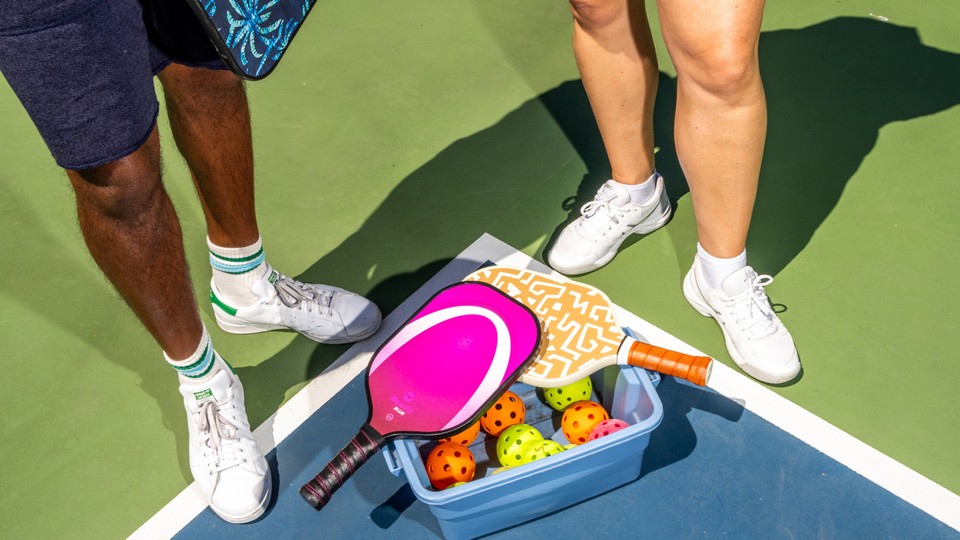 In April, thousands of people, and occasionally their pets, flocked to the coastal city of Naples, Florida. They weren’t in town for an AARP convention or the bacchanalia of spring break. No, the Minto US Open Pickleball Championships, brought to you in part by Margaritaville Hotels & Resorts, was in the final stretch of its seven-day run. For one week, attendees watched, cheered, and imbibed as hopefuls thwacked it out for the title and its $100,000 purse. CBS Sports Network broadcast the event, whose matches were held on the Zing Zang Championship Court (I’m serious). Announcers boomed into the mic as finalists slapped the game’s yellow plastic ball across the net.

Perhaps you’ve noticed, or wish you hadn’t, that pickleball is everywhere. Everywhere. It is America’s fastest-growing sport, and nearly 5 million “picklers” are playing it. Since pickleball’s inception in the mid-1960s by two suburban dads wanting to entertain their families, the game has been mostly confined to backyards and church-group driveways. And it is a simple game at heart––inexpensive and deeply accessible. Paddles, a Wiffle-like ball, chalk-drawn lines, and a portable net are all that’s needed to play. It was an antidote to loneliness and boredom, even before the pandemic drove people outside to play it en masse. It is now commonplace to know someone who plays it, who swears by it, who’s headed to the blacktop tomorrow morning, net in tow, with a zealous gleam in their eye.

Pickleball might have gladly remained in the capable hands of its amateur paddlers. But somewhere along the way, this innocuous, mildly paced, favored-by-retirees sport was swept into a maelstrom of commercialization. Pickleball now has an official footwear sponsor for its U.S. championship: Skechers. It has a magazine, aptly named Pickleball Magazine, whose cover was recently graced by the country-pop star Maren Morris. And it has a long list of investors, including Tom Brady, who have jumped aboard to help professionalize it. This scrappy little paddle engine that could is now forecast to become a quarter-billion-dollar industry by 2028, one baffling celebrity endorsement at a time.

To the casual observer, pickleball looks more like, say, cornhole or bocce ball than a bona fide sport. Like tennis, it’s played in singles and doubles, with serves and ground strokes and volleys. There’s strategic shot placement to be made, and coordinated footwork to execute. The best players are deft, quick. But there’s a level of rowdiness, not cutthroat stakes, that feels essential to what pickleball fundamentally is. Yelling matches over whose turn it is to hit the ball are frequent; near my apartment, 20-somethings swing away with a Whiteclaw in one hand and a paddle in the other. The game’s popularity is understandable. It gets the blood pumping without taxing the body as much as tennis. Because the playing area is so small, about one-fourth the size of a tennis court, players in their 80s can retrieve shots nearly as easily as their grandchildren. The Kardashians filmed a video of themselves playing; TV ads with Jamie Foxx in them now feature people playing.

But none of this changes the fact that the ball that picklers play with is too big to take too seriously; hitting the smooth, 40-holed hard-plastic sphere at even 40 miles per hour is considered fast. By contrast, the fastest tennis serve on record is 163 miles an hour. The fastest forehand: 124 miles an hour. Even the humble shuttlecock, the “ball” in badminton, long a favorite of lawn parties, boasts a world record of 306 miles an hour. Watch a highlight reel of a professional tennis, Ping Pong, or badminton match, and your jaw will be on the floor, your senses awash in superhuman reflexes and lightning-quick exchanges. Look at the footwork. Marvel at the speed. In pickleball, there is a shot called the dink. The dink has a technical definition—to soft-hit the ball so it arcs over the net, preventing an aggressive return—but the term could also be reasonably applied to nearly every shot in pickleball. Watch the highlight reel of the 2022 US Open Pickleball Championships and your jaw … might stay right where it is.

And yet, last month, Brady joined an ownership group that bought a Major League Pickleball expansion team ahead of the 2023 season. A few weeks earlier, the investment firm LRMR, co-founded by LeBron James, put down for a piece of the pro-pickleball pie. Superstar athletes including Kevin Durant, Draymond Green, Kevin Love, and Drew Brees have also forked over for ownership stakes in teams. They’ve sung pickleball’s merits, earnestly, and with a profound sense of commitment about being a part of the sport’s future, a sport that’s gunning to be—and very well may become—officially sanctioned by the International Olympic Committee.

This push to turn pickleball pro has legitimized the sport to the extent that even professional tennis players are making the switch. In September, the American Sam Querrey—once ranked 11th in the world—announced that he was retiring from tennis and heading to the pickleball courts. Noah Rubin, who won the 2014 Wimbledon junior championship, declared that he’d be doing the same.

A chunk of the corporate efforts are oriented toward rookie enthusiasts. Developers and investors across the country are throwing money at bids for hybrid pickleball-entertainment facilities, and a cadre of VC funders are swarming to get in on pickleball e-commerce brands. Somewhere along the way, it was announced that crypto would be used for prize money at the Orange County Cup tournament in San Clemente, California. And so here we are. In theory, pickleball’s ascent to the apex of commercialization makes sense. Is anything more American than trying to profit off the latest fad? As Chris Rock once said on SNL, “In America, there are no sacred days, [because] we commercialize everything.” He was right. Holidays. Tragedies. Pickleball.

But although money has always sloshed around in sports—look at the NFL or the NBA—pickleball’s viral trajectory from park playground to the major leagues feels new. It is hard, maybe impossible, to recall any other sport in recent history that has experienced such a momentous coupling of casual enthusiasm and fervor for its professionalization. Last June, the Pro Pickleball Association inked a deal with the sports-betting agency Genius Sports. Bets aren’t available to place yet, but the siren call feels imminent. Still, there is an innate irreconcilability between the easy-on-the-knees game adored by elderly players and the game that C-suite execs have mined for any number of revenue streams. At this point, it no longer seems to matter whether this is or isn’t a bubble, or whether anyone will want to watch it on television in a year, let alone five.

In the end, pickleball, the brunch of racquet sports, has been celebrated, maligned, avoided, and exploited. It’s a cash cow. Pickleball societies and Chicken N Pickles and major league–endorsed memes abound to point to as proof.

In the beginning, pickleball was simply a backyard game intended to bring joy and entertainment. Did it need to be anything more than that?

This article previously misstated how many holes are in the ball used by pickleball players.