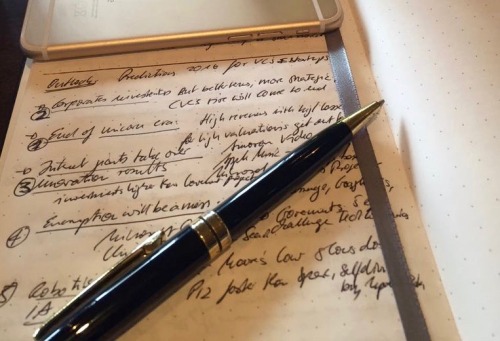 It’s the time of the year to blog about predictions for the new year.

1. The end of the unicorn era

The new year will mark the end of the unicorn era investment strategy. Private Investors will stop believing in ever increasing valuations until an IPO in the far future. Private equity and late stage VCs will become more careful investing in those 130+ companies valued above $1B. While fueling the late stage high valuation rounds will come to a slow down the high fundings in early stages will too. Unsurprisingly corporations, who invested in those companies in recent years, will stop doing so. They are slow in learning but they will do eventually.

Following the education of corporations as investors in late stage companies, the corporate investment activities will change. Corporations will still be active in startup companies but they will rethink how they do it. Some corporate VCs have lowered their number of deals already. The end of corporate accelerators and incubators have been discussed lengthy in other publications. Instead of equity investments corporations will do what they can do best: partner with young, agile companies. Finding beneficial cooperation models by reselling and/or bundling their own product portfolio with those of startups will get more into focus in 2016. Fintech is a good example already where startups are looking for partnering with traditional banks to increase their customer access. Transferwise, Funding Circle and Gini are just the tip of the iceberg but this strategy will lead the development for 2016. Same is true for mobility sector and insure-tech.

3. Internet giants take over the commodity

Banks in Germany listed Internet giants like Apple and Google most likely as their competition in digital payment and banking services for 2016 rather than fintech startups. The success of Apple Pay is proving this thread. However the ownership of eyeballs and distribution platforms is having an impact in several industries as we see in publishing where facebook is taking over the distribution of news content. In entertaining they also lead with the success of Amazon Video versus Netflix and Apple Music versus Spotify. Even in logistics Amazon is challenging Fedex as well as Uber. Everything what can be commoditized will be commoditized which leads to the dominance of horizontally built Internet companies over vertical focused startups. Another reason why unicorns will see the end of their era coming.

In 2015 we have seen a lot of engineering development which is making us doubtful about our common expectations in technology. Those are small hints but in 2016 those hints will be more obvious and disturbing at least. Intel is admitting that it might not keep up with Moore’s Law. Private companies will take more and more business and scientific research off from governments. NASA is giving its business to Project X and in health research we see private companies leading the work against cancer and Alzheimer. We see the implementation of autonomous driving by a remote software update in a car. Law makers need to keep up with those developments to think about the usage of this new technologies. Robotics and Artificial Intelligence will further more challenge the philosophical and ethical use of technology. What used to be topics of novels and science magazines in the past will become a daily discussion for the coming years. 2016 will mark the year when all this became mainstream. New ventures will need to think about a society, which needs to be prepared and govern how to use the products of this new generation.

5. Law makers will need to handle the mess

The good and evil in technology will be discussed most prominently on the topics of encryption. If governments and ruling tech companies can not agree on the use of encryption it will be interesting to see how they will discuss AI, robotics and mobility in the future. It has become obvious, that like guns, new technologies will be used by bad guys as well. Preventing the abuse of technology and control access to capacities of technologies will be a challenge for future generations. The fundamental discussions and rules will happen starting with the new year. It looks like encryption is the first example for these discussions and it has become a mess already. I am a believer of privacy and availability of encryption with no backdoors. This is not easy to achieve but a necessity in a free world. But it is just one of the ethical discussions we need to have based on the technology cycle we are in. Dependencies of investments on the results of those discussions will become part of any due diligence in the future for investors.

It won’t be easier to invest in startups based on those conclusions. There are still risks from new influencers. Technology has become more reliable and a lot cheaper. The value of investments is becoming more difficult to be calculated because of more variables being in the game. Investors will need more knowledge outside their core field of expertise as of today.